Virtual Worldcon: Conventions In The Time Of Coronavirus 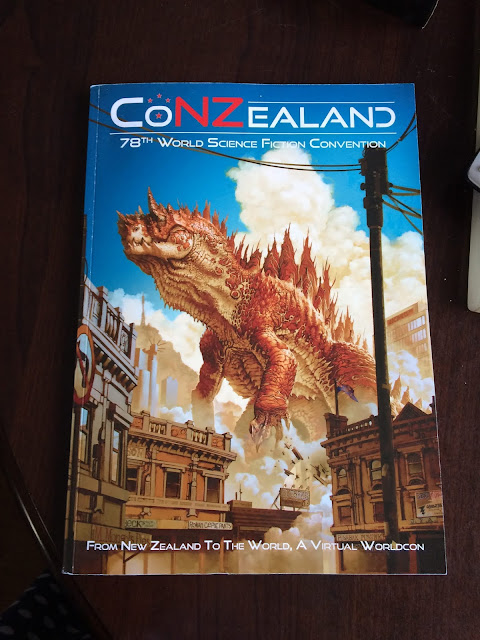 I attended my first virtual convention a few weeks ago, ConZealand (the 78th Worldcon). This was my second Worldcon, with Helsinki as my first. I know many people were disappointed when Worldcon went virtual, but for people like me who couldn't have attended the con at all if it had been in New Zealand, this was actually a great opportunity to participate after all. I purchased my membership right after the announcement with very little expectations as to what the con would actually be like, figuring that at least the money would go to a good cause, but I have to say I was pleasantly surprised.
There are actually many advantages to a virtual convention: no standing in line, everybody fits into the "room" for whichever panel they want to watch, and, best of all, as most panels/events were recorded, people could watch them at their leisure. The program could be accessed through Grenadine, which had links to Zoom for the actual panels. For most panels only the panelists could turn their video and microphones on and everybody else was automatically muted, which made attending the panels stress-free, and joining a panel late didn't disturb anyone. ConZealand used Discord for discussions (the panel "rooms"), and they had also created spaces there for virtual bars, the consuite, etc. There was a place to post cosplay pics, and the Masquerade also went virtual. Additional content could be found on the ConZealand site, like virtual tours of New Zealand (I especially loved my virtual visit to Hobbiton) and a virtual exhibition hall, art show, and the recorded panels.
My experience, technology-wise, went quite smoothly. I was familiar with Discord from a writing course that used it for discussions, and Zoom was quite easy to figure out. I had no trouble logging in, and all the panels I watched live or from recording went smoothly. The only issues I had were with the Larry Dixon and Mercedes Lackey panels (the guests of honour), because they were unable to use Zoom and Discord didn't actually work too well. As I understand it, you can't mute or turn off cameras for the audience in Discord, and that was a problem. I can't speak for the writing workshops or kaffeeklatsches, because I didn't attend any due to the time difference. (Most of those happened in the middle of the night European time.) The Hugo awards broadcast had some technical issues, but that was the worst of it.
Speaking of the Hugo awards, that was the only thing that soured the con experience a bit for me. (If you don't know what I'm talking about, you can catch up here.) I mostly enjoyed Martin's hosting and found his anecdotes about former Hugo ceremonies entertaining, but some of the jokes did make me a bit uncomfortable. I do see the point of the people who took offence, but I also felt a bit sorry for Martin, because I genuinely believe he didn't mean to hurt anyone or exclude people. I watched the rest of his panels and he was feeling very nostalgic, and that was probably why he included the stories he did. Some of the fault also lies with the con organisers, because they should have seen to things like sending Martin the correct pronunciations of the finalists' names. If they had looked through the material, maybe they could have discussed the potentially offensive bits with Martin and taken them out. But as I'm looking at this from a position of privilege, my opinion doesn't really matter. For what it's worth, Martin did apologise. Hopefully the next Worldcon will do better.
All in all, virtual Worldcon was a positive experience for me and I wholeheartedly recommend it to anyone considering attending a virtual convention. (There's one this Saturday, ReCONvene, if anyone's interested. Membership is only 10 dollars.) As far as I can see, I did all of the things I would have done at a regular convention, watched panels, met people, joined in discussions. Maybe I would have attended a party or two or a workshop at a regular con. If DisCon III, the next Worldcon, goes virtual, I'll definitely attend.