To Fluff Or Not To Fluff? 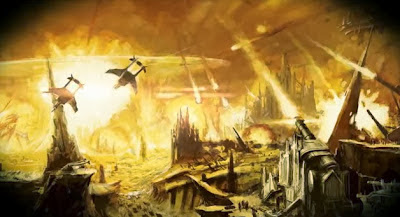 So after a friend of mine sparked a really interesting conversation on facebook regarding powergaming vs fluffier gameplay in 40k, i felt inspired to do a follow up article about it. (Vortaine recently posted an article covering the powergaming thing also, so this is mainly the fluff side of things.) Several interesting points were made during the course of the 60+ comment topic. It all stemmed from the fact that the new Tau formation seems to allow it to be taken by any army in the game, leading to the question, just because you can, does it really mean you should?
Clocking at around 560 points with no upgrades or drones, the Tau formation is a pretty powerful unit on its own, but being able to add this to any army pretty much can beef up any armies inadequacy in the area of anti armor/heavy infantry hunting. From this then came the question of powergaming, where you end up with really whacky combinations of allies/ army comp, just to be able to utilize said formations/rules. A lot of the other people in the conversation seemed to take the same stance, being that they much prefer a fluffy list - which can still be made to be competitive anyway -, rather than some strange combo that background wise would be more myth than ever a reality.

Personally, i have always been more one for fluff accurate lists than i ever have for flat-out power gaming stuff, such as spamming stuff, etc. I think the allies thing is a nice addition to the game for those who want to make a mixed force, such as an Imperial Guard/ Space Marine list that is perhaps meant to be an Armageddon Task Force. Stuff like this is really cool even if this is maybe perhaps to sell models and nothing more. Its good for the hobby. When it gets stupid is with some of the combos. Not even necessarily powerful ones, but just ones that make very little sense. Chaos and Tau? highly unlikely. Grey Knights and any Xenos? pretty dubious. This kind of thing is where i think it can ruin stuff. While each and every person is very well entitled to their opinions and choices of models for their armies, I for one, will not be rolling a bunch of Dark Eldar with my Salamanders, even if it gave me a nice advantage (not saying it does, just an example), because, for Salamanders fluff, they hate Dark Eldar, meaning it would make little to no sense for this to ever occur. I like running Imperial armies as just that. I think its possible to do anything with just those for the purposes of my lists.

This isn't to say that reasons can't be made for doing such things. One of commenter in the facebook chat actually did mention that he has no issue with it if someone has written some creative reason for the inclusion of said stuff in their army from a background standpoint. I can respect that outlook too as I'm all for hearing peoples stories if they take the time to do it. Just unfortunate that usually this is never the case its often just thrown in for the sake of competitive advantage. I guess this is one of the distinguishing features of a purely competitive gamer versus one who is more a hobbyist. Competitive is often a "don't care what i take as long as win" attitude, while hobbyists are more about coming up with an interesting list that fits what their imagination comes up with.

Well anyways, its just my own personal opinion on it, and I'm sure there are plenty other arguments for it the other way too, but felt that I should put out something on it as its a pretty interesting subject as it was a pretty interesting chat that occurred once the issue was brought up. :)