Being particularly fond of vintage art, I recently purchased a group of pictures from an online auction.  Unless it is something exceptionally rare, most of the time these forgotten pictures can be purchased for little of nothing.    In that group of framed pictures that I bought for less than $10, was also a portfolio of art signed and dated by the same individual.  As I rifled through the amateur artwork, I began making assumptions based on my perceptions.  The signature on many of the paintings simply said “Carlyle”.  While this was a gender-neutral name to me, I assumed it had been assigned to a male.  While there were a few paintings in the portfolio depicting men, most of the art depicted women.  Again, I assumed a man possibly painting the woman he admired, as the model seemed to age in some of the paintings.  I also made the assumption that the artist was perhaps melancholy in nature as so many of the paintings portrayed dark colors and heavy strokes.  I also entertained the idea of another artist, perhaps someone related to Carlyle, adding a few pieces to the portfolio because some of the art seemed so out of character with my preconceived notions of the artist.  To add to this theory, I found artwork signed with two different surnames. 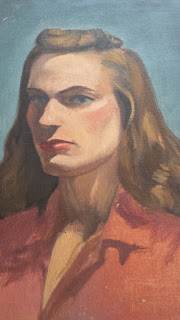 When my husband looked at the portfolio, he had different assumptions.  He immediately believed the artist to be female and thought that the entire portfolio was created by one individual.  Having already formed an opinion, my mind immediately began to argue with his theory.  After all, I had this mysterious person’s story line already started in my head.  As Mike began to expound on his thoughts, I began to soften towards his ideas and could see how my preconceived notions could very well be wrong.  He offered the thought that the use of two different last names could indicate that the artist had married and taken her spouse’s last name.  And, while many of the paintings depicted dark colors and a heavy stroke, there were pieces that indicated the artist did have a lighter, less serious side.  One painting depicted a couple in a sailboat and one could almost feel the stress of the artist sailing away with each stroke that created the illusion of salty winds and waves.  For  more fun, there was what appeared to be an original pattern prototype for paper dolls in the portfolio, complete with detailed outfits sketched on thin paper.  Some of the architectural sketches that I first assumed had been drawn by a man contained colors and details that could have been more likely drawn from a woman’s detailed perspective of the things that make a house a home. 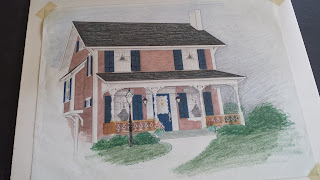 Most likely, this novice artist will remain a mystery to us and while it is fun to try to reconstruct history and imagine the lives of the people whose hands have painted the pictures, drawn the sketches, written the words and lived in the past, making assumptions in our daily lives can be dangerous business.   Having the mind of “a writer”, I tend to want to weave what I see into a story line, even if it’s only in my head and never makes it to the written page.  How damaging this can be for those we find ourselves “studying” when we allow our assumptions to influence truth.  We never see things so clearly until we are on the receiving end of the scrutiny and the stories that are woven together by those who refuse to see the truth become daggers that pierce our hearts.
As I find myself on the other side of such a situation and try to see through the hurt and make sense of a senseless situation, I am struck with two lessons.  The first lesson is so obvious and gives me the opportunity to become a better person if I am willing to be critical of my own thoughts and actions.  I must stop the negative assumptions in regard to others and open my mind to truth rather than construct my own story lines regarding those with whom I interact.  This lesson has an internal to external application.  The second lesson is the external to internal application.  As I listened to my husband’s interpretation of the artist’s portfolio, I was finally able to laugh, realizing how different our perceptions were.  So many things influence our responses to what we see in life. We dissect everything through the lens of our own personal grief and joy.  Somehow finding the ability to laugh, or even just be slightly amused, at the erroneous misconceptions of others in regard to our character, motives or actions, is the door to being free from internalizing all that hurt.  It’s certainly not easy when the story lines that have been spread in no way resembles the person we know ourselves to be, but it seems to me if one can find a way to laugh at the ridiculousness of a situation, some of those negative emotions can be released and we can find ways to continue to foster growth in our own lives instead of resorting to the vicious cycle of defending ourselves to those who refuse to see truth.
In the end, neither my perceptions or my husband’s perceptions of the portfolio filled with sketches and paintings really makes any difference.  What matters is that the artist found an outlet in which they were able to express their creativity.  And those story lines that others attribute to our lives when they can’t bring themselves to see or admit the truth?  They don’t matter much either.   Mostly what I see in the old portfolio of art created by someone I don't know is the obvious progress they made with their persistence to keep on practicing and creating and growing. 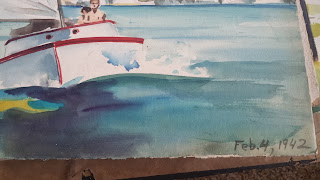