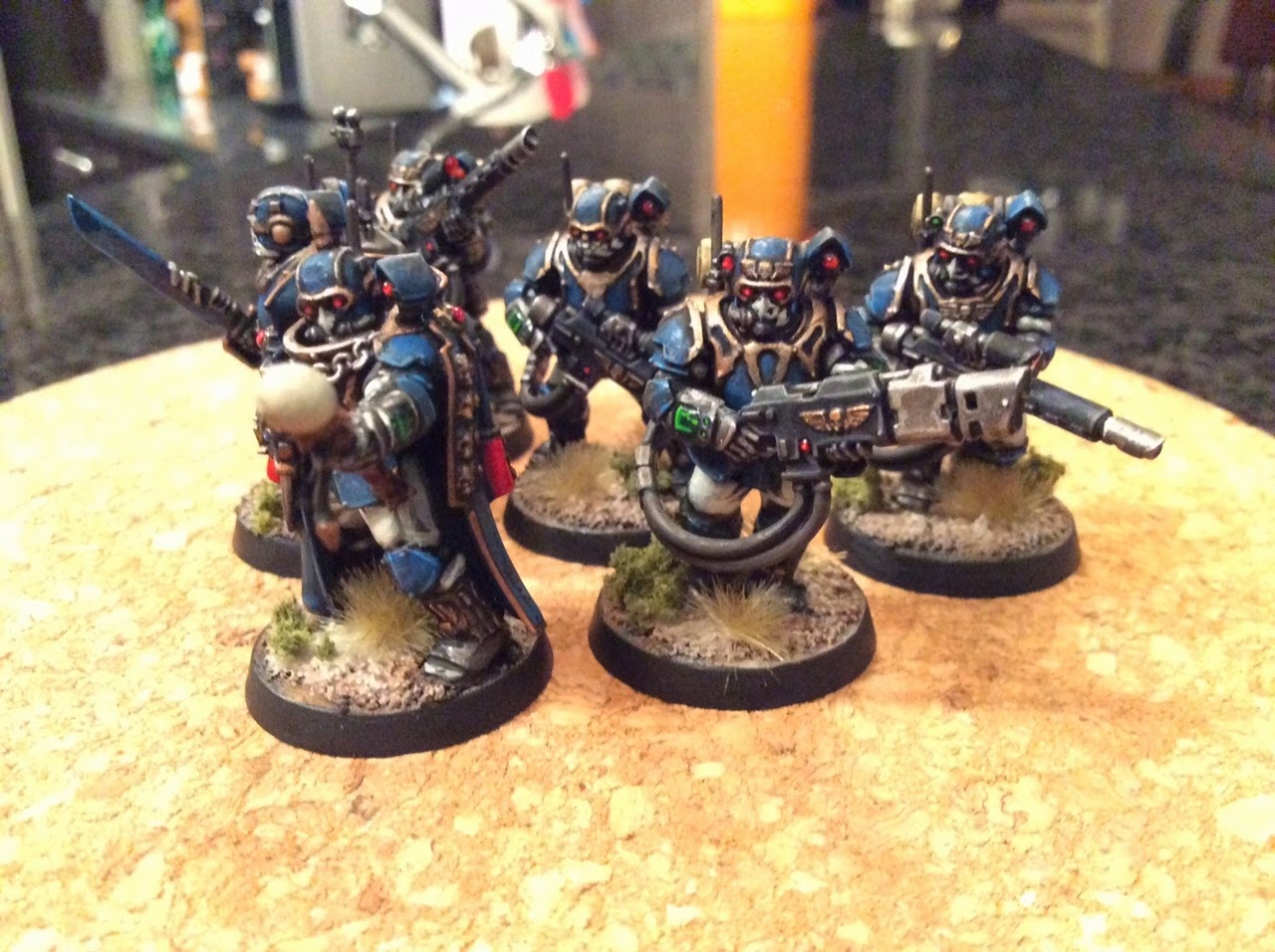 New Tempestus Scions (a.k.a. "Storm Troopers) from GWOur good friend Curt is coming to visit later this week, and we are preparing to host one of his favourite games - Warhammer 40k! HAH.  Well, yes, it's true! Not that Curt loves 40k, but that in the spirit of flagellation, we will be running a 40k game during his visit this week!  And I am rushing to get some new figures done in time to participate - "Tempestus Scions", the new plastic storm trooper figures for the Imperial Guard. 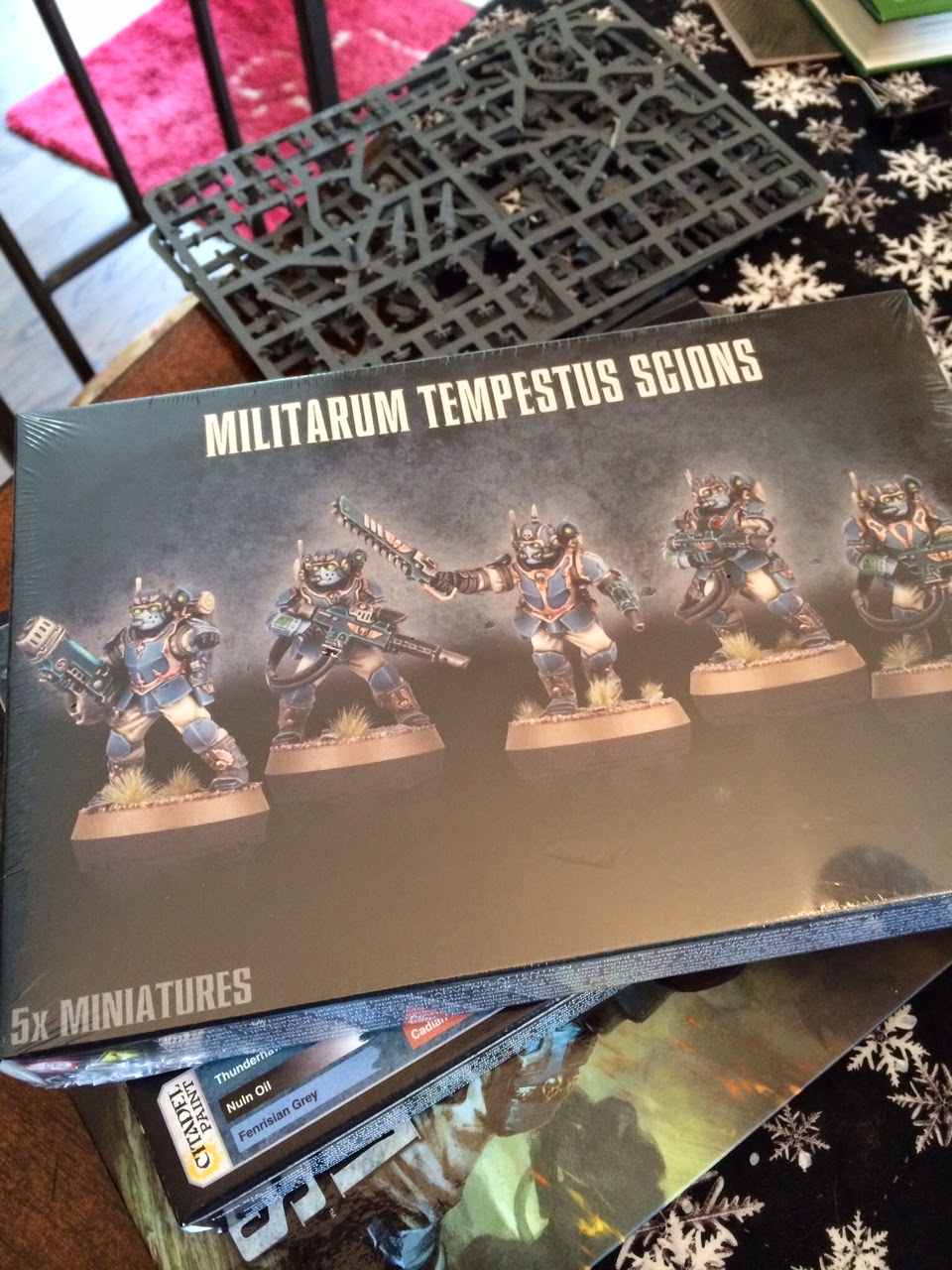 Tons of bits and options - but still, only five dudes...f*ck you, GWIn the fluff of the 40k setting, we know that in the event of a real threat Space Marines are dispatched to "deal with" the problem. These Space-Marine-situations generally involve outright, often hopeless, heavy duty fighting which the Marines are literally bred for, and well-equipped to deal with. 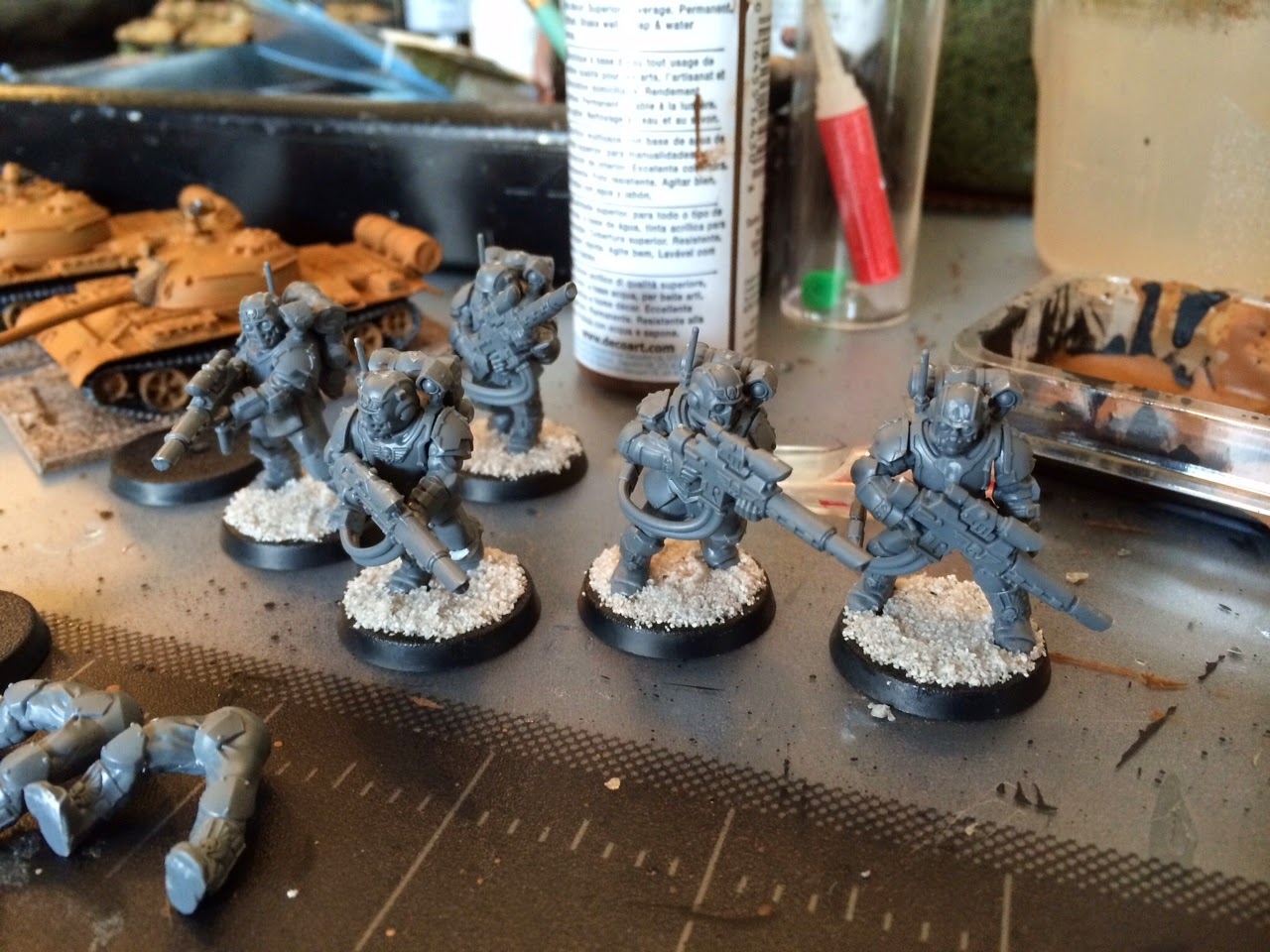 Assembled and waiting to be primed
The Marines are of course very elite troops, but "elite" in the sense that you can send 100 of them to open battle and they will subdue an entire planetary rebellion, not "elite" in the sense that they deploy quietly to operate in a commando-style fashion.  Sure, the Marines will deploy behind the lines, but that's only because they have found the source of the problem, and are sending a bunch of nasty fellows in drop pods to deal with it directly. Who needs a long walk when you can just hop out of the drop pod and smash the Emperor's enemies right away? 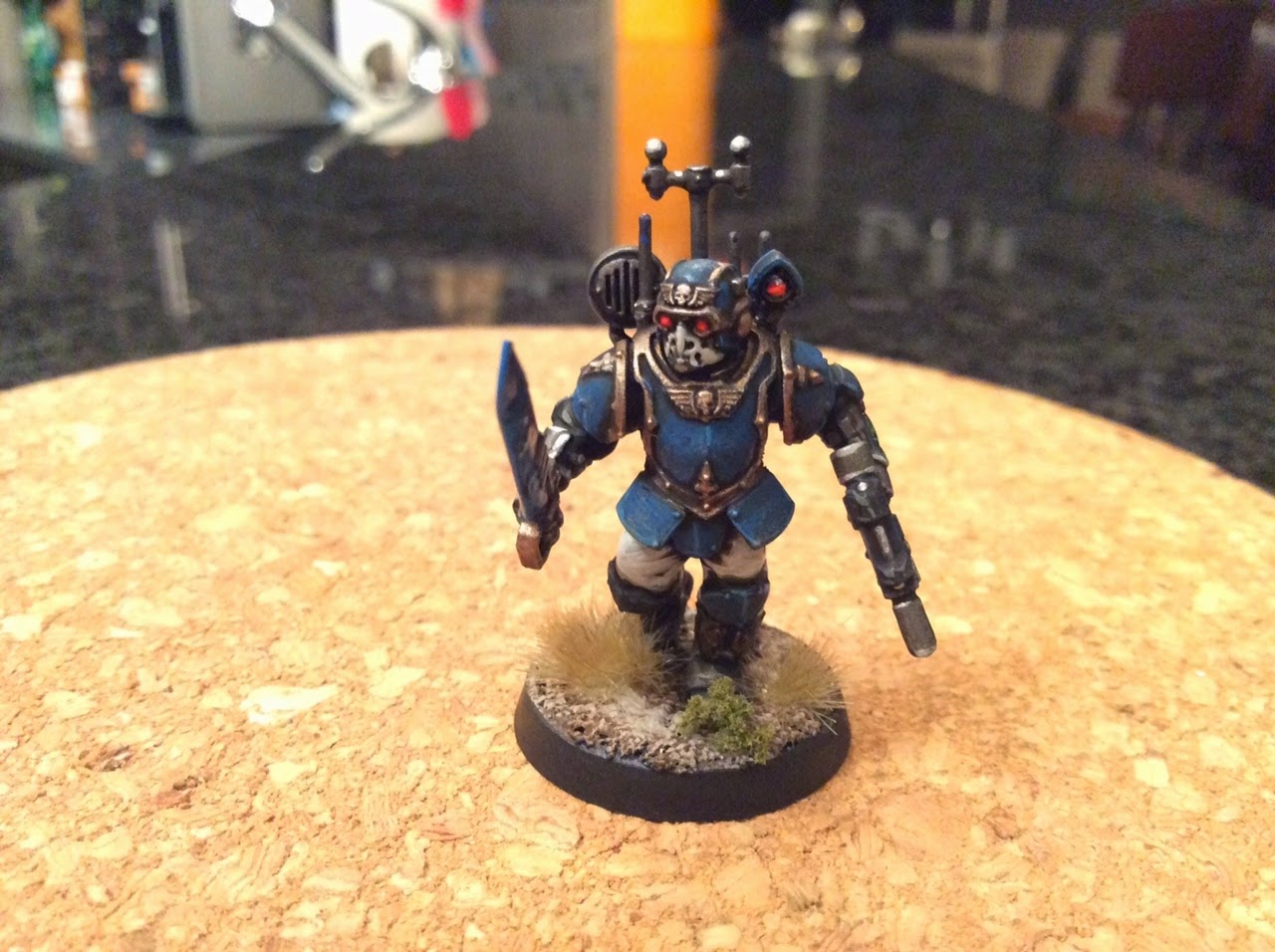 The "Tempestor" a.k.a a sergeant 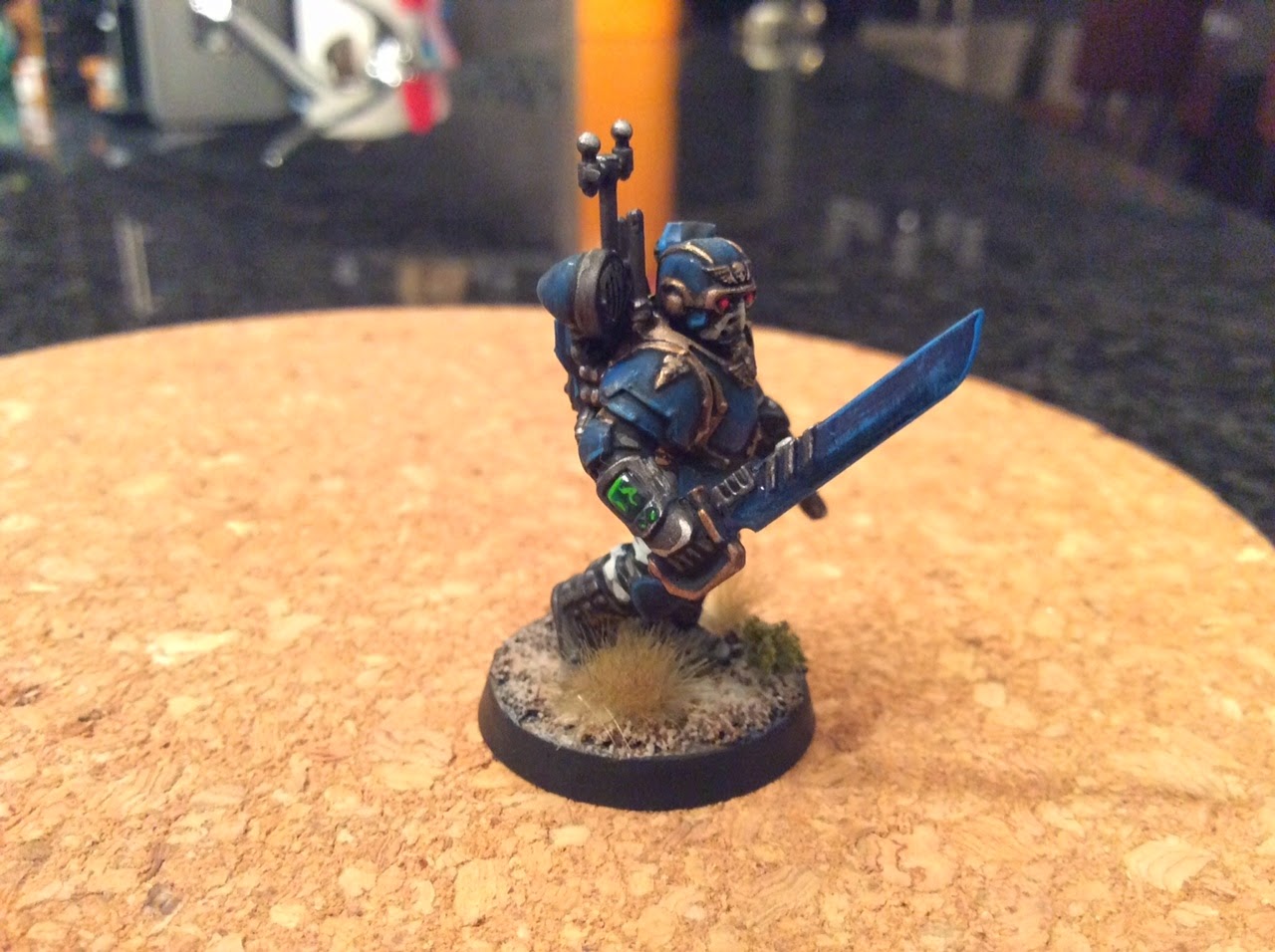 I tossed the vox caster on him...I liked the look of this, but I don't intend to use the vox casters on the table as they are pretty useless...and if you give one to a trooper, he loses his weapon...The Imperial Guard storm troopers have laboured long in this shadow, a favourite troop type of Imperial Guard players. Elite army soldiers, well-equipped for commando-type jobs and special missions that would occur in the context of an Imperial Guard deployment, like sabotage, long-range recon, demolition of high-priority targets, abduction of prisoners, rescue of prisoners, assassination etc. Cool stuff, but not stuff that a Space Marine Chapter Master would worry about dispatching even one of his payroll servitors for, much less a company of valued Marines.  The storm troopers filled this niche gap, albeit one that existed mostly in the minds of dedicated Imperial Guard fans. 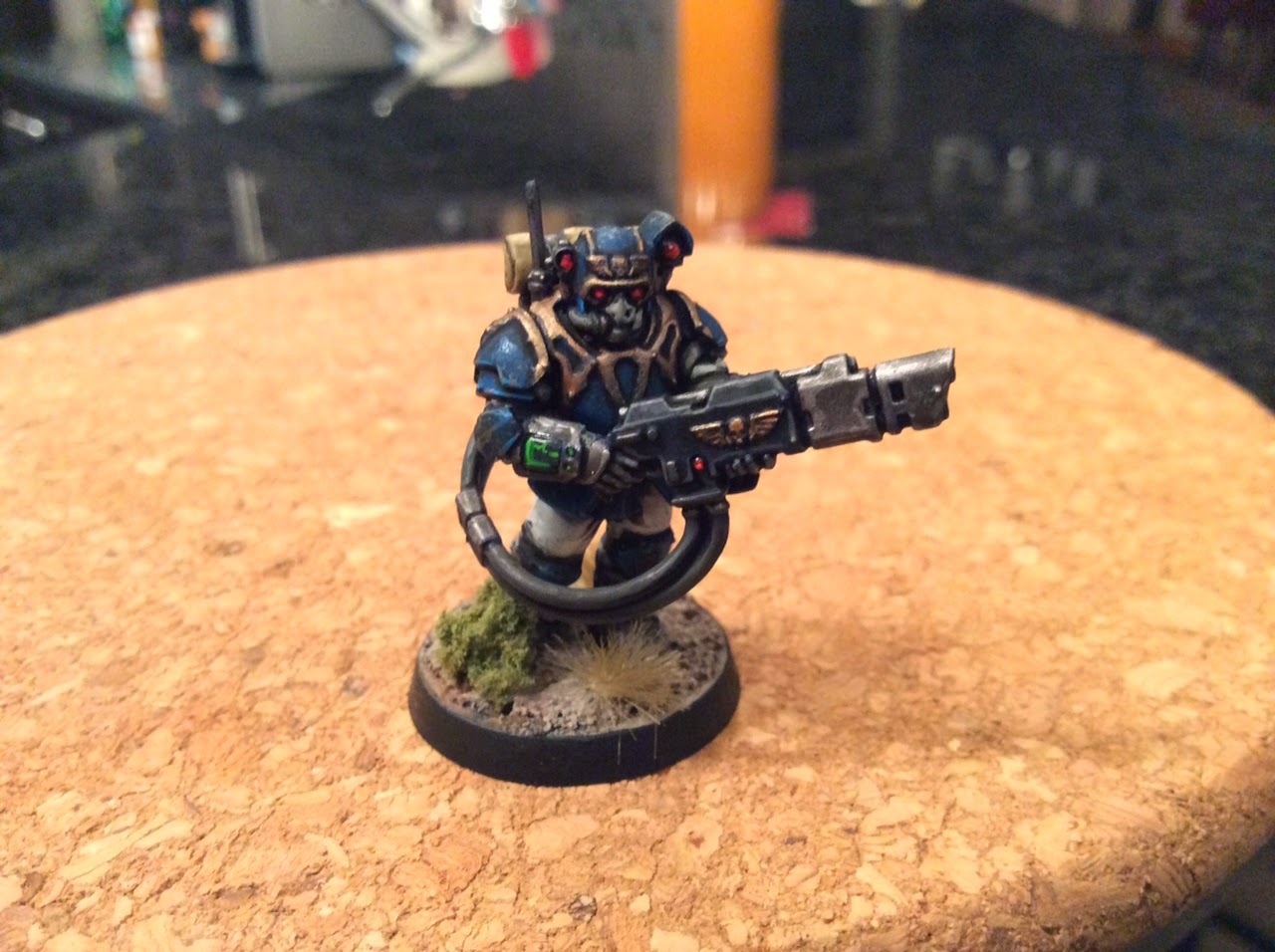 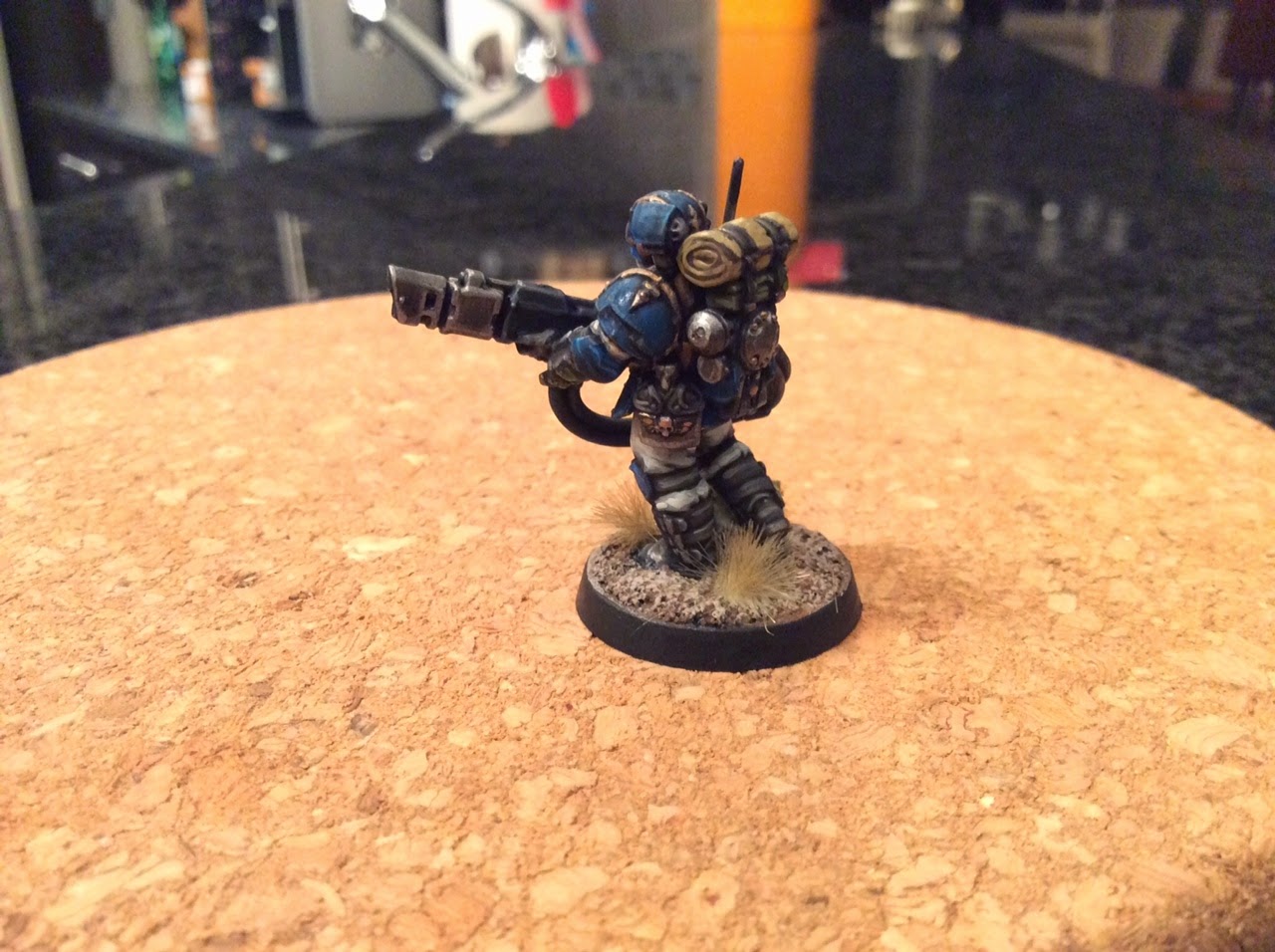 You can see a bit of the back pack here - they sure carry a lot of stuff into the field!As far as I can tell (and I know a more knowledgeable hobby fan out there will correct me if I'm wrong :) the Storm Troopers first appeared in the second edition of the WH40k game - this would be in mid-late to late 1990s, I think?  They had things that appealed to an Imperial Guard player - a better ballistic skill, and lasguns that could really hurt! How cool! 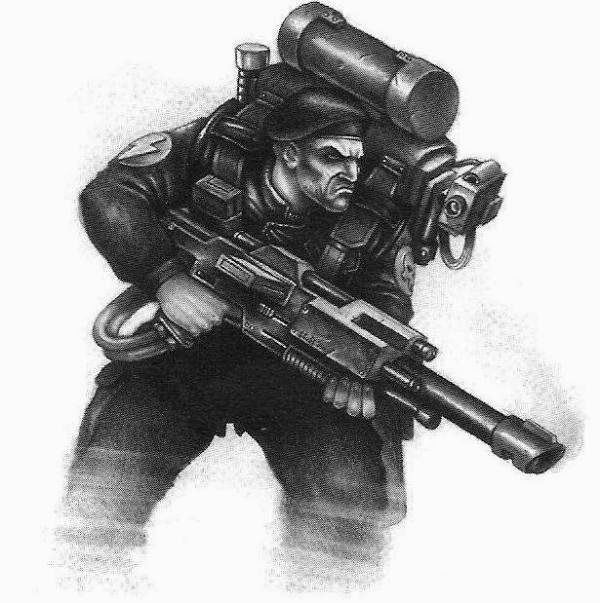 The original 40k storm troopers...the first plastic versions were faithful to this art work, and are prized parts of many Imperial Guard collections
The original storm troopers were plastic monopose figures, with metal officers, metal special weapon troopers and a metal heavy weapon team. They wore berets and stoic expressions. A lot of Guard players I know look fondly on these original figures, and they often fetch a premium on Ebay. I have personally never really liked the originals - the poses were very limited, and the two-man heavy weapon team was silly.  But I loved the overall principle! Elite troops to buck up your regular hapless grunts. As an Imperial Guard fanboy, I was in! 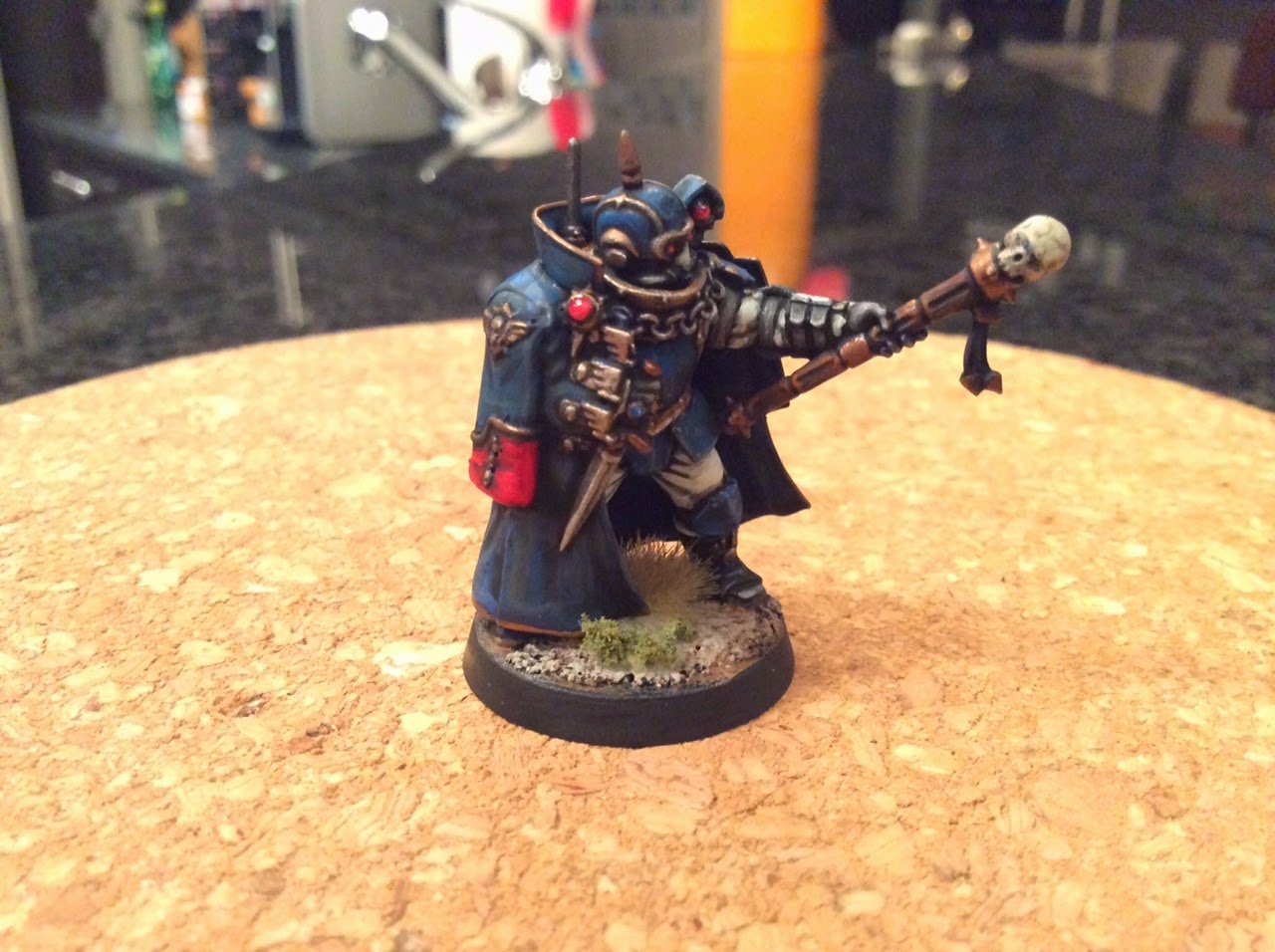 "Tempestor Prime" (or something like that) a.k.a. "Captain" - you have several posing options for him, but they are all pretty melodramatic 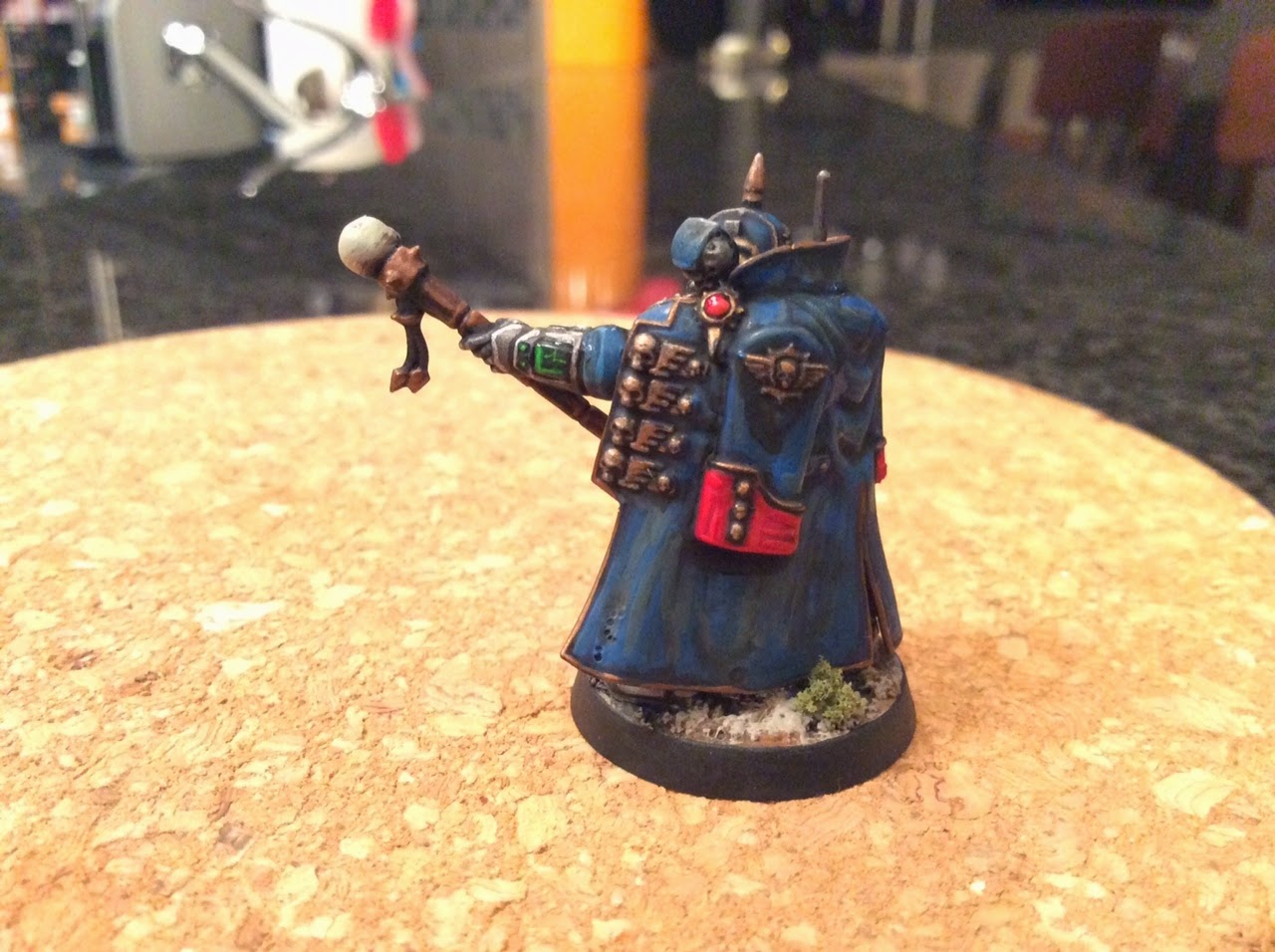 Not sure this get-up makes sense for a commando operation, but hey - it's 40k :) There are a depressing number of skulls on this model - too many to remove sensibly, but he certainly looks unique...As 40k evolved into the 3rd edition (and since then, into what I like to think of as the 34567th edition, as I find them all to be so similar to each other) the Storm Trooper models changed.  I can no longer recall what year they were issued, but metal storm troopers appeared, and these were (and still are) some of the coolest sculpts GW ever issued. These looked like dark future SEALS! Cool guns, lots of optics, heavy armour, but still sort-of-sleek and ominous looking. 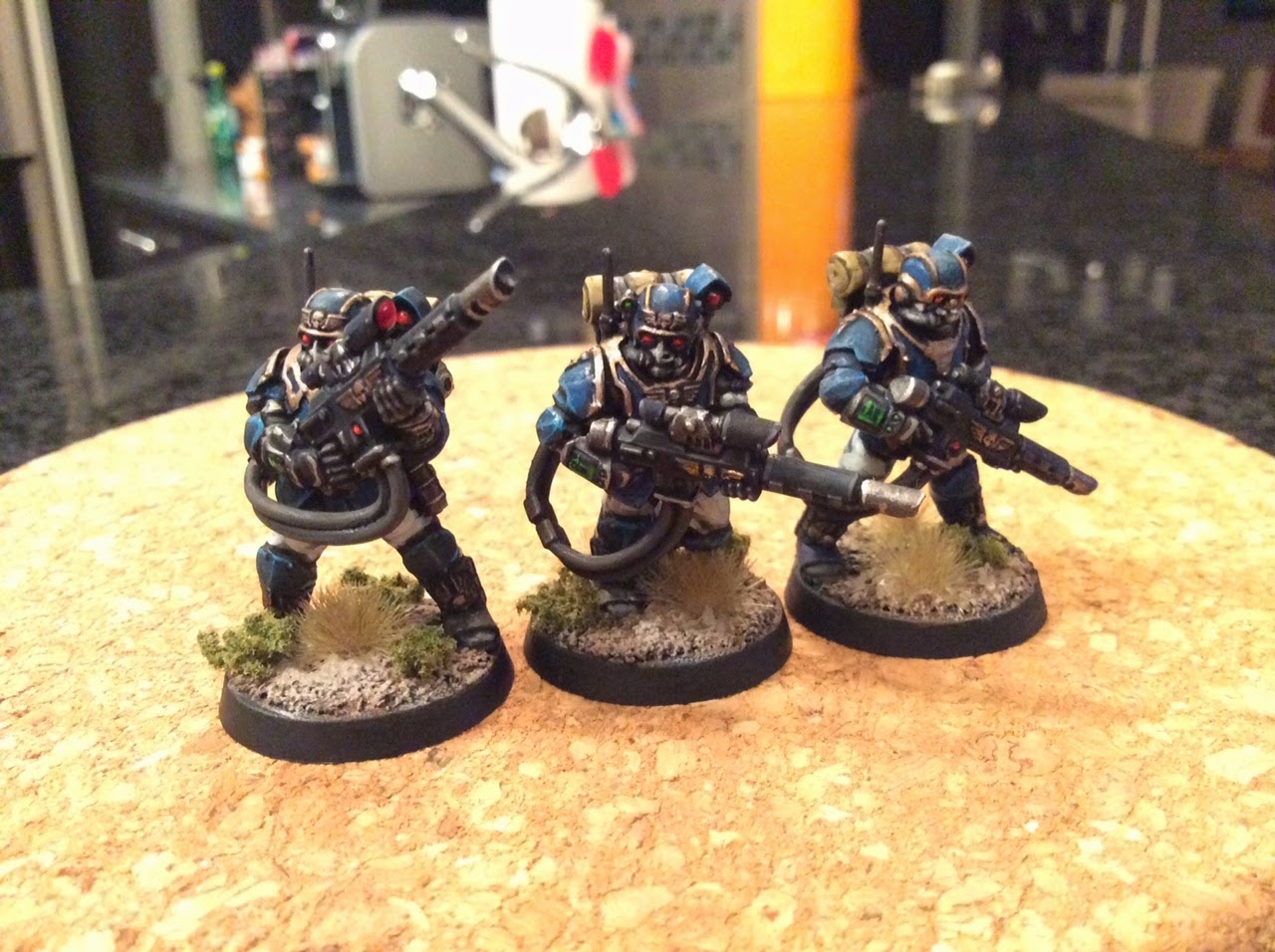 A group of Scions
A further evolution came in the form of the "Kasrkin", originally elite Cadian troops.  These were also some of the nicest GW sculpts I have seen, certainly a lot nicer than the plastic Cadians. The Kasrkin, to me, looked more like "heavy infantry" than commandos - some heavier armour and guns, but with the bulk and the heavy cables for the "hot shot" lasguns, I couldn't really see them sneaking around behind the lines. I still loved these models - and I painted 30 of the frigging things about 10 years ago to play a "Grenadier" Imperial Guard detachment - heavy infantry in APCs, backed by tanks etc. So fun. 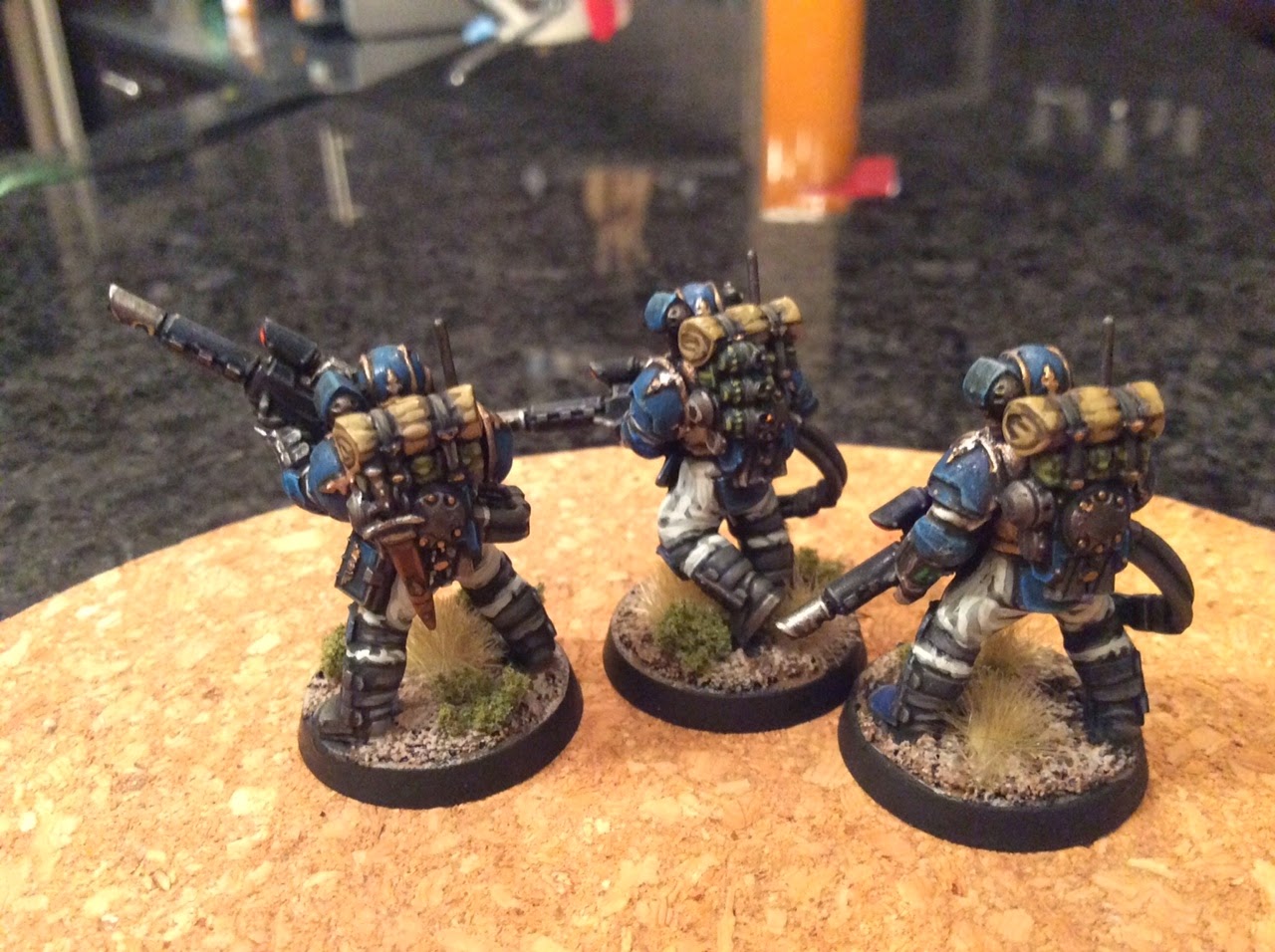 Another view of the pack - each one is a little different - some have grenades, some have knives etc.
The actual game performance of the storm troopers was very poor - after all, their lasguns were S 3, and in the era of the 34567 edition it is the AP of the weapon that matters (and yes, a lot of 40k players will spew disagreement about this, but I stand by it).  Increasingly, the 40k has become a duel between heavy weapons (that is, until you get into "close combat"), and the "hot shot" lasguns were of dubious value (i.e. none).  Same with the 4+ save - it sounded nice in theory, but never showed its value in practice. You played storm troopers/Kasrkin because you liked the figures, not because you got good results on the table. 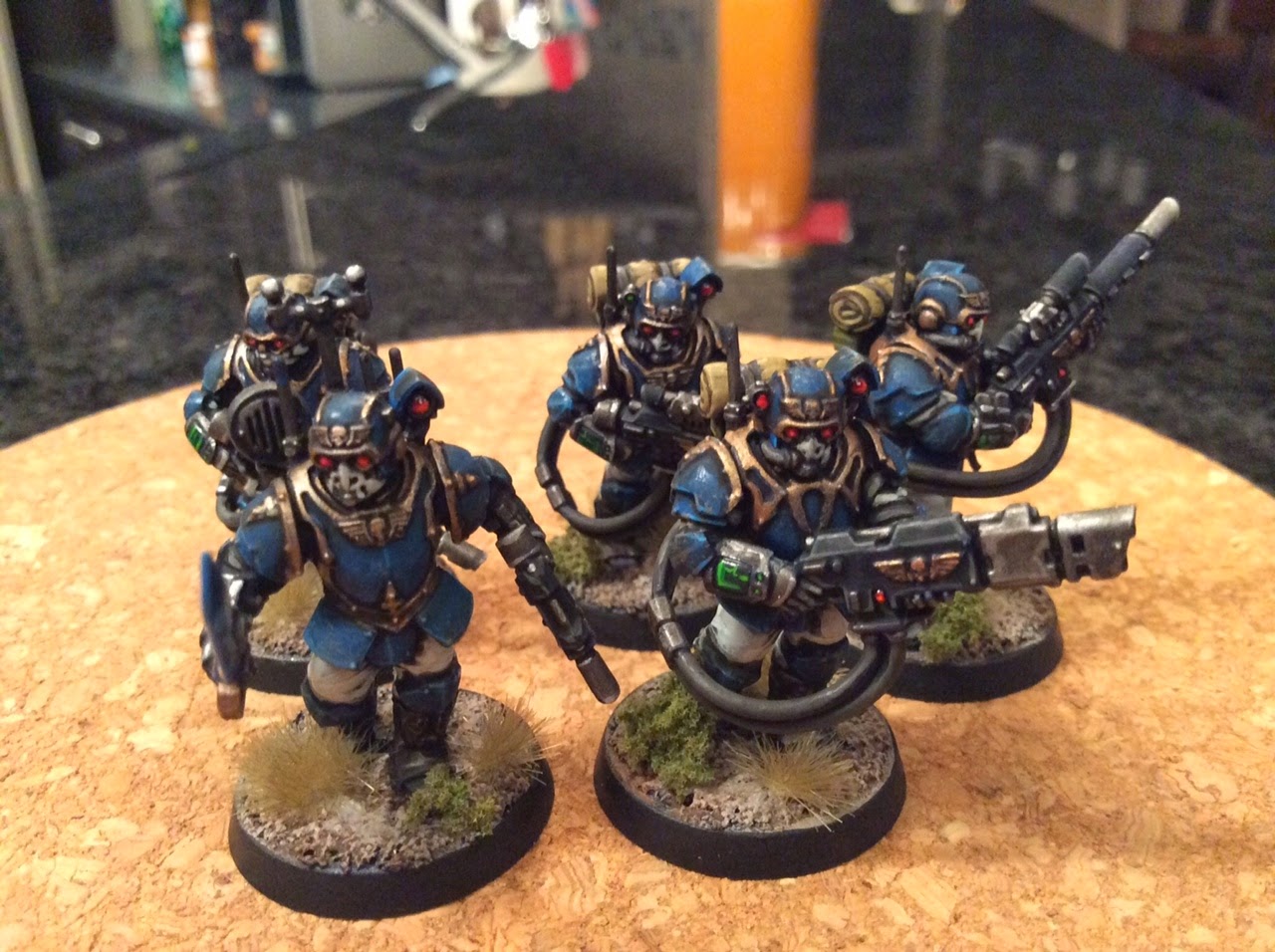 A five-man storm trooper squad
In the sixth edition Imperial Guard codex, out of the blue, GW's fickle rules flakes suddenly gave the "hot shot" lasguns an AP 3.  This is sufficient to knock out a Space Marine! And yet...the gun is still S 3...so...whatever you need to do to sell figures, I guess...this post is already too long, but I guess all I will say here is this is what happens with the S/AP system...that's a rant for another time. 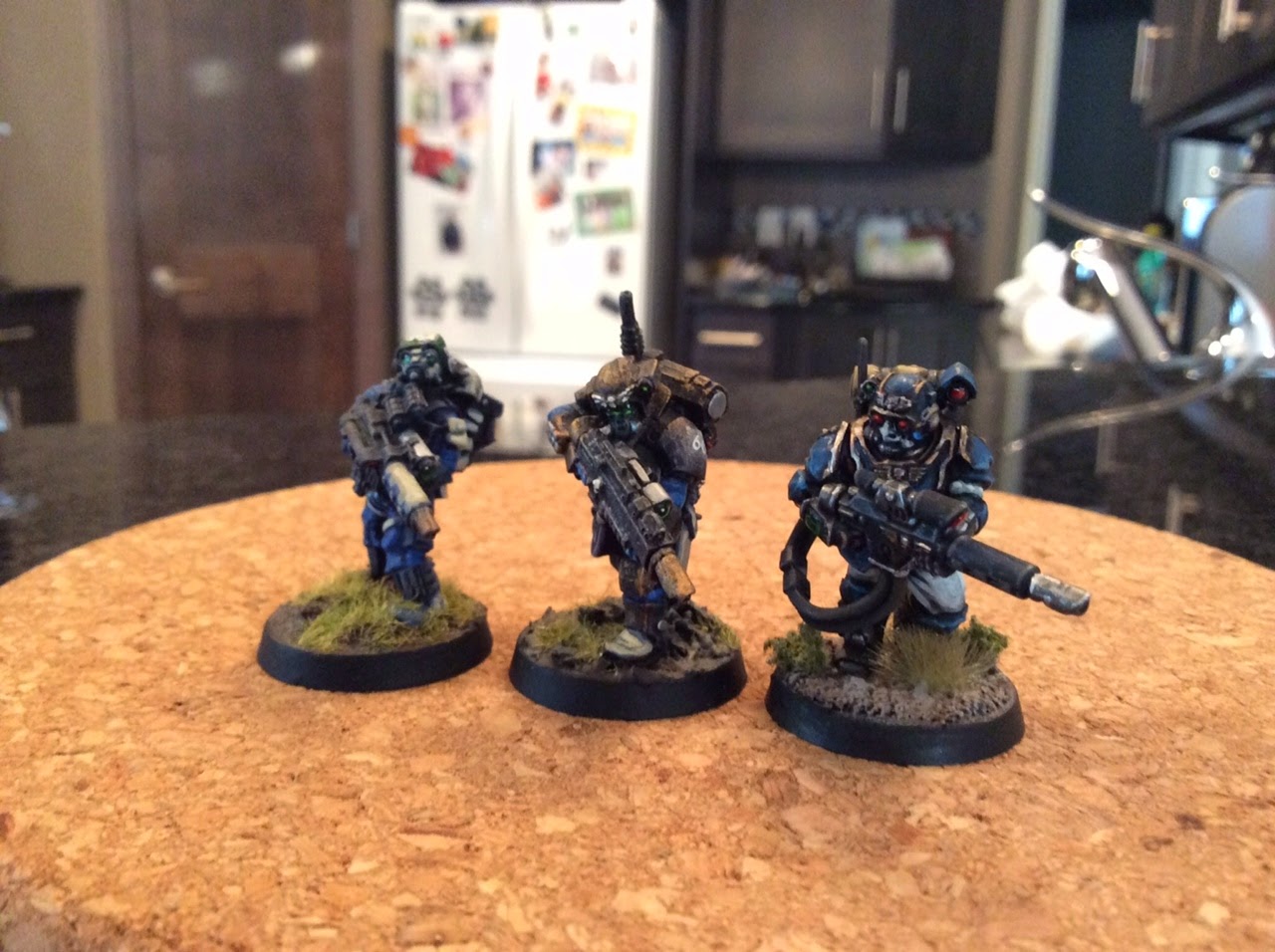 Through the ages - a SEAL style metal trooper on the left, a "Kasrkin" in the middle, and a new plastic Scion on the right 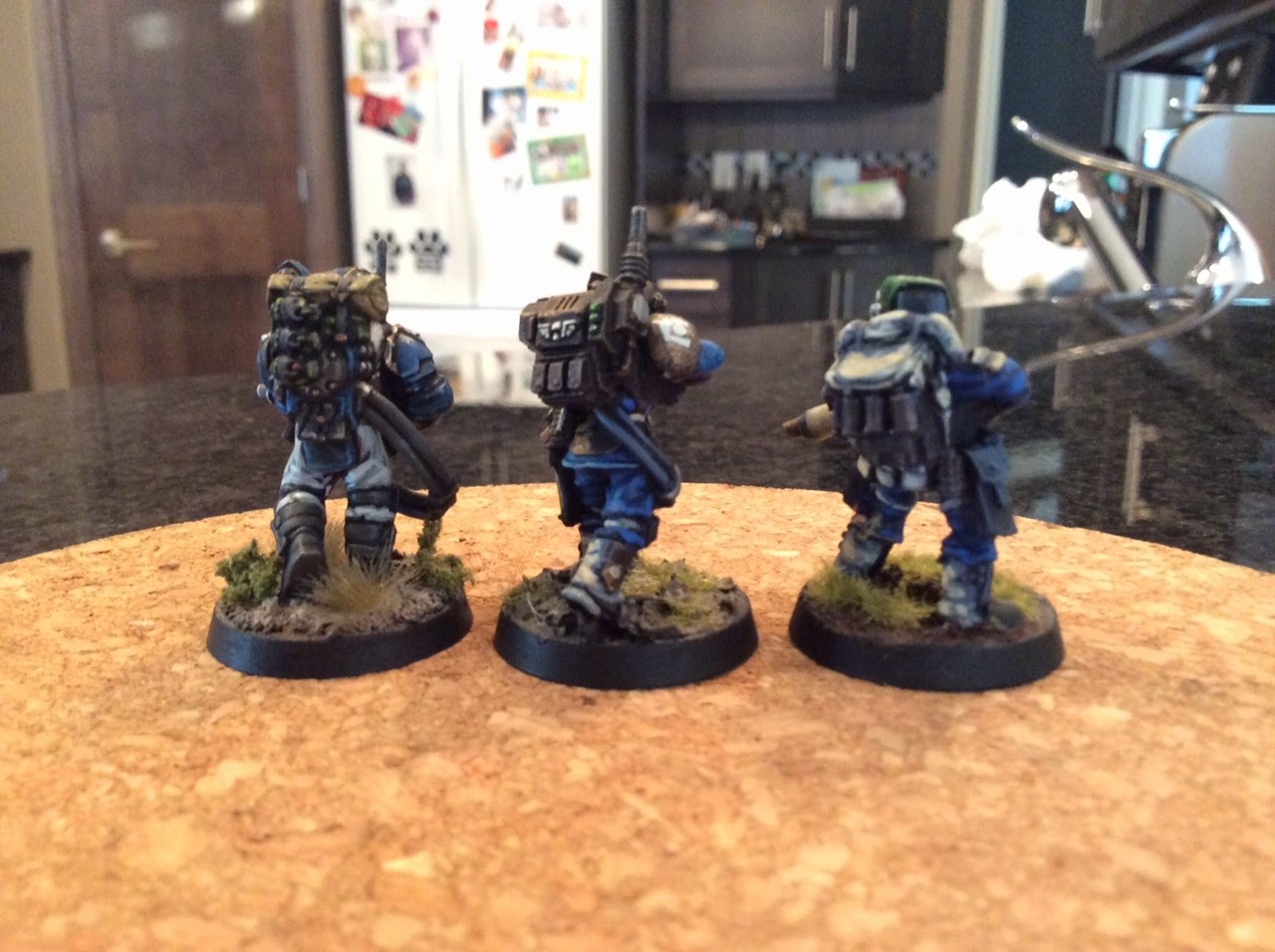 Another comparison of the different models
In the era of the 34567th edition, there have been different ways to try and field a force of storm troopers.  For a time you could use "doctrines" and have them as "grenadiers".  You could get "sort of" storm troopers by taking veterans (who could get carapace armour, but not the "hot shot" guns).  And now, we have the "Tempestus Scions".  They have their own pamphlet-codex (which I won't get into here, other than to say don't bother with it unless you are a storm trooper fan boy like me) and a whole new set of plastic figures. 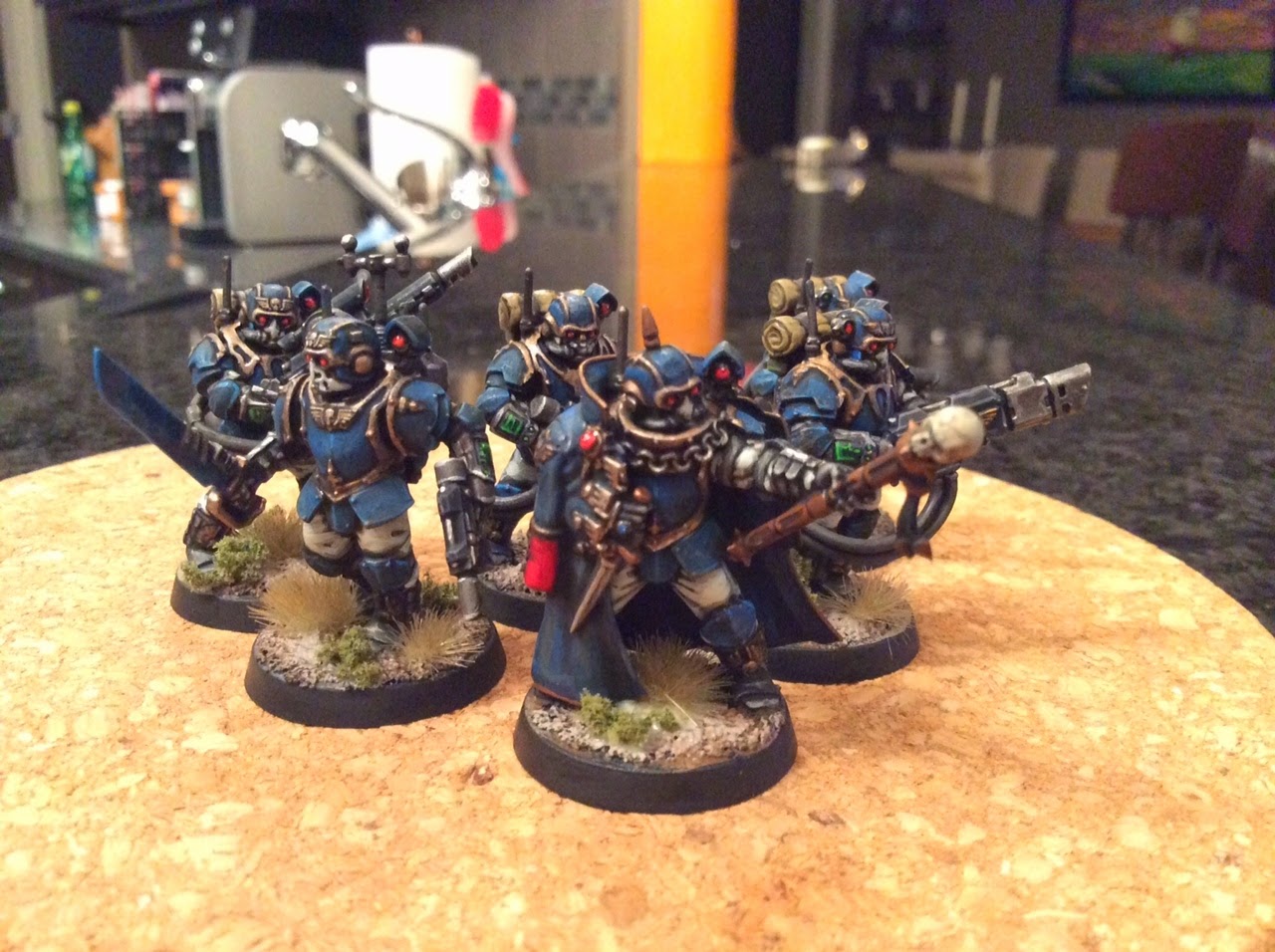 Which direction is Regina?The set is pretty neat.  You are now able to make command figures and command accessory figures (like the medic, standard etc), something the lead figures of the third-and-later editions never did have beyond a couple of sergeant figures.  The Tempestus design pays homage, in my view, to each "era" of the storm trooper figures. There are beret heads (assuming the Catachans haven't ruined berets for you) as a shout-out to the originals.  The "hot shot" guns look very much like the SEAL version of the storm trooper, as do many of the helmet-variant optics. The armour plates somewhat evoke the heavy-infantry "Kasrkin" look, as do the hulking packs and weapon cables.  But they are still unique, with elaborate, flowery armour accents that suit the setting.  And, sadly, a LOT of skulls...but since they are plastic, you can shave quite a few of them off with minimal effort to leave a slightly-less skull-heavy figure.

The expense of the new models is horrifying ($42 CDN per box of five figures), but if you are like me, and you painted a bunch of the older storm troopers, you will find these can fit in with those older sculpts with a bit of imagination and a similar paint scheme.  That's my plan, and if I can bear down at the painting table (kind of hard, as the weather has been so nice for once), I'm hoping to finish enough of these to see some action this week. Will they suck on the table? Maybe! We'll see!