In addition to painting the odd figure here and there myself, I have been augmenting my Star Wars Legion collection with various figures that I have purchased or commissioned.

Arguably, the television show The Mandalorian has almost single-handedly revived the Star Wars franchise. Certainly, it's my favourite piece of Star Wars media in the last 20 years or so, with the possible exception of the film Rogue One. My first entry is the titular character, Din Djarin and his adoptive son, Grogu.

Before Christmas, UK Facebook user Jonathan Corps held a fundraiser for The Fairy Godbrothers charity (they send sick children to Disneyland and such), selling several 3D printed Mando and Child figures that he had painted. He left the bases empty for the buyers to place terrain to suit. It's a lovely, delicate print (see Baby Yoda's cute little fingers), and Jonathan painted it in striking fashion. I just added some acrylic garnet gel medium and painted the groundwork to match the rest of my collection. 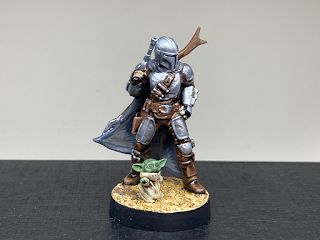 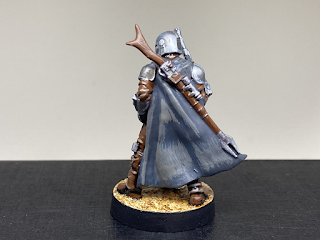 The next several entries are from the Polish commission painting service, Minis for War.

Jyn Urso is one of the main characters from Rogue One: A Star Wars Story. The model is a decent likeness of actress Felicity Jones. Minis for War have really shown the character's grit and determination. 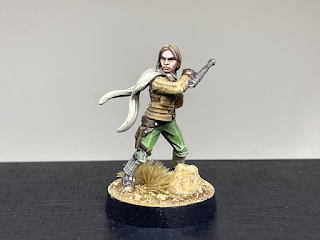 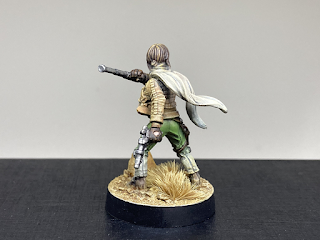 Also from Rogue One, I commissioned a second squad of Pathfinders, so I can field two squads with two different heavy weapon options. I like especially how the alien squad leaders were rendered. in game terms, my two Pathfinder squads have good synergy with Jyn, infiltrating near the enemy. 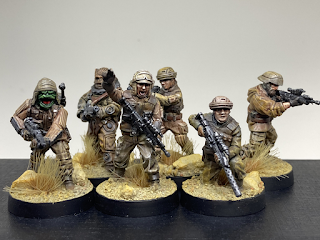 I recently painted the LE Luke Skywalker. He will be a great commander for these Rebel Veterans. At my request, they based them in a more desert scheme, instead of winter groundwork (like when the troop type first appeared on Hoth in The Empire Strikes Back). The figures remind me of coalition forces serving in the Middle East (with an alien twist). 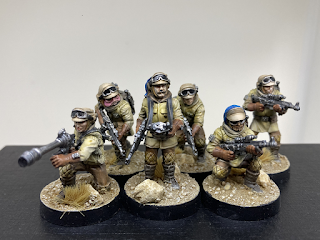 First seen in Empire is this Rebel Veteran Mark II medium repeating blaster. Very dangerous looking, and a welcome addition to my Rebel forces, who don't have a lot in the way of heavy weapons and war machines. 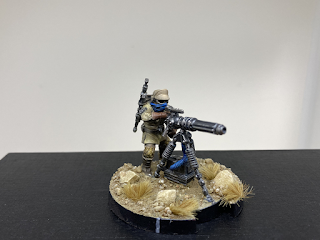 Also first appearing in Rogue One are these imperial Shoretroopers. They have also appeared in The Mandalorian; they seem to be a type of garrison troop. Their groundwork is suitable for Scarif, Tatooine, and other sandy places. I like the details Minis for War did on the armour. 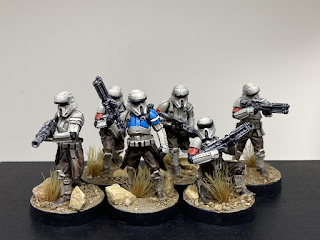 To support the Shoretrooper squad is this last Minis for War commission, a DF-90 mortar. In the Star Wars Legion tournament meta, for awhile Shoretrooper squads and mortars were the "go to" choice to fill up one's Imperial "Corps" unit slots (i.e., the mandatory rank and file troopers, as opposed to elites or heavy support); this was due to a peculiarity of the rules that has since been rectified in a (free) revision via downloadable PDF. I do love my Stormtroopers. 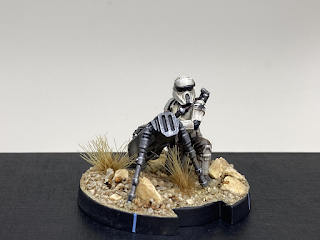 First appearing in Rogue One, but also appearing in Star Wars Rebels, and as part of Moff Gideon's forces in The Mandalorian, are these Death Troopers. Like their movie counterparts, in the game these troops shoot straight and hit hard. The central figure with the raised fist is a named character from Rebels, a female Death Trooper named DT-F16.  I obtained these on eBay from  UK modeler "protechpainting". 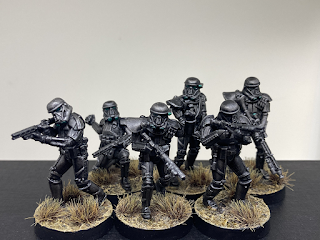 What's better than a squad of Death Troopers? Two squads of Death Troopers! I got these from eBay painter "sweathoger". With their starship decking bases, they go with the Darth Vader that SteveB painted for me. I will field them with the alternative figure to DT-F16, the model with the DLT-19 repeating blaster (which looks a LOT like a WWII German MG 34 dressed up for sci fi). 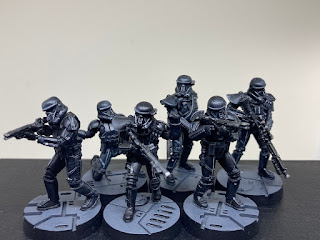 At the time of writing this article I have 114 painted Star Wars Legion figures, walkers, and speeder bikes. lots of choice for the scenarios I am writing, in the hopes of playing face to face games again in the hopefully not-too-distant future. Stay safe! 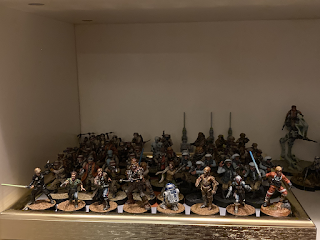 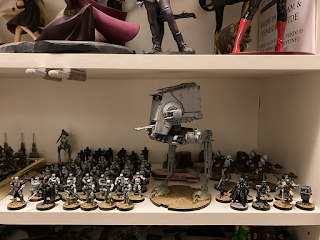