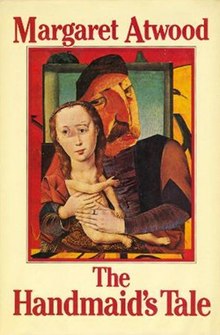 The Handmaid's Tale, a 1985 dystopian novel by Margaret Atwood, feels very current right now. It wasn't on my Science Fiction Classics list, but is should be. International Women's Day seems like the perfect time to reflect on the book's message. And yes, this post contains spoilers, beware!

The novel tells the story of Offred, a woman living in a future version of the United States where an extreme Christian movement has staged a military coup, murdered the president, and turned the country into a religious dictatorship. The first thing the new government did was strip women of all rights and made them the property of men. Offered still remembers the good old days, which allows Atwood to reflect on the true horror of what life in Gilead has become.

In the novel, the environment has been poisoned and fertility is declining, which has led into the creation of a class of women called the Handmaids, posted to the families of powerful men to produce children. Abortions and prenatal testing is outlawed, of course, and doctors who have performed abortions in the past end up lynched. The women get a choice that isn't really a choice: become a handmaid of get shipped off to the Colonies to die or be used as slave labor (best case scenario). Other classes of women are the Wives, who are trapped inside their houses and not allowed to do much of anything but tend their gardens and wait around for the handmaid to get pregnant; the Marthas, who do housework; the Unwomen, basically anyone who protests or fails to perform their duties (off to the Colonies with you!); and the Jezebels, prostitutes who don't officially exist.

The novel is written in first person, which lends it an intimacy that helps the reader get close to Offred and sympathise with her. Offered has lost everything in an ill-fated escape attempt: her husband, her daughter, and even her name. As a handmaid, she is called by the name of the man she belongs to, Offred = Of Fred. Due to Atwood's subtle narration, this realisation is truly chilling for the reader, as are other atrocities presented matter of factly through Offred's eyes. The plot gets going when the Commander Offred belongs to starts an affair with her. When Offred isn't getting pregnant, the Commander's wife arranges for her to have sex with the chauffeur Nick in the hopes that she might conceive, and Offred falls in love with him. The story end with Offred in trouble and getting into a van, not certain if it will take her to her death in the hands of the government or to the underground who will try to smuggle her out. There is a bit more, though, a report talking about the found tapes which contain the Handmaid's Tale and reflection on Gilead as if from the future, so I interpreted that to state that she got out in the end, a little ray of hope in the otherwise grim narrative.

What about writer tricks? I thought Atwood used mirror characters very well in the novel. At one point the Commander takes Offred to a secret club where the Jezebels entertain the men, where she meets an old friend, Moira, a powerful lesbian woman who escaped the Handmaid institution only to end up a prostitute, showing us what could have happened if Offred had been stronger and tried to escape. If even Moira couldn't get out, how could she? There is also another handmaid who succeeds in getting pregnant and giving birth. Her story doesn't have a happy ending either.

One thing that struck me was that no one is actually happy in this scenario, not even the men. The Commander sneaks around with Offred, Nick and others like him aren't allowed wives until they've attained sufficient power in the community, and everybody's paranoid with the spies called Eyes of God watching their every step.

I liked Atwood's writing style and enjoyed the book, in spite of the grim subject matter. It's not an easy book to read, but every woman should read this, I think, especially the Americans. If I had read the book a few years ago, it wouldn't have affected me so deeply. That could never really happen, I would have thought. But now, seeing Trump and his followers promoting extreme religious values and stomping on women's rights in the U. S., I wonder. In the book the military coup was justified by the fear of radical Islam. Sound familiar? There's nothing I can do to fight Trump, but maybe I can help those that can. Planned Parenthood accepts international donations. Seems like a good time to contribute.