Reading The Classics: The Moonstone By Wilkie Collins 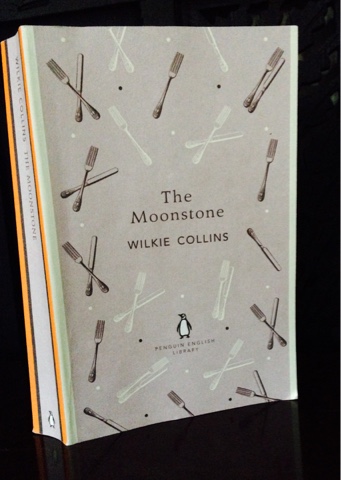 Wilkie Collins (1824-1889) was an English novelist who wrote "sensational novels,"  a genre that preceded modern suspense novels. I have a soft spot for his work, because in a way he was a pulp writer before there was such a thing. (The genre developed from the Victorian "penny dreadfuls" in the late 1800s.) He's also remembered for his close friendship with Charles Dickens. It's a bit sad that Collins is often portrayed as only a footnote in Dickens' story, a lesser writer basking in the master's genius, because he was a talented writer, too. I love Dickens, but when it comes to plot and clarity of expression, I find Collins much easier to follow. His prose feels quite modern, actually.
The Moonstone is considered the first modern English detective story.  It's told in a number of first person accounts by diverse and quirky characters. The plot is exiting, beginning with a corrupt army officer stealing the diamond from a shrine in India. He gives it to his niece, and of course the stone goes missing. There's no shortage of suspects, with many characters behaving suspiciously and irrationally and the three Indian jugglers seen skulking in the vicinity of the house the night before. There's also a romantic subplot, complete with two love triangles, and an implied curse on the diamond.
The characters are a joy, from Betteredge, a head servant with a penchant for Robinson Crusoe, to Ms. Clack, a holier-than-thou hypocrite trying to force her faith on people, for their own good, of course. The story also has the archetypal clever detective, Sergeant Cuff. While Poe's Dupin is often cited as the inspiration for Conan Doyle's Sherlock Holmes, I did wonder if Sergeant Cuff might have been an influence, too. It's fascinating to speculate about how much Collins learned from Dickens about creating memorable characters. I'm sure the two greatly influenced each other's writing.
The book is also famous for its realistic depiction of opium addiction. Collins suffered from chronic pain, "rheumatic gout" or "neuralgia," he called it. He became addicted to laudanum when he started taking it as a painkiller and sedative. As time passed, he began to have serious side effects, including seeing a doppelgänger he called "Ghost Wilkie."
I found The Moonstone an enjoyable read, and I actually didn't guess the thief before the big revelation. I'm looking forward to reading The Woman in White, Collins' other famous work.
Reading as a writer, I feel there's a great deal to be learned here about characterisation, plotting, and utilising the basic tools of mystery writing like red herrings and misdirection. I also found the novel useful as research for writing stories set in Victorian times. Collins' style shows that you don't need to go overly ornate for a story to sound Victorian.
If you want to learn more about Collins, check out this website. It has links to all of Collins' fiction, including rarities like his plays. If you find the myth more fascinating than the man, maybe check out Dan Simmons' Drood, which is based on the lives of Dickens and Collins.