Question Of Translation: Armitage And Gawain 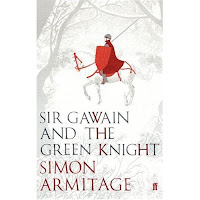 Where was I last week? I was at the Cheltenham Literature Festival, and one of the events I attended involved British poet Simon Armitage talking about – and reading extracts from – his version of the 14th-century poem 'Sir Gawain and the Green Knight'.

I say 'version' but the word that Armitage used in his talk was 'translation'. 'Translation' was also used in The Independent's review, for example.

However when I was studying Middle English at university, one of my tutors told me never to use the word 'translation' to refer to this process of writing Modern English (or rather, modern English) versions of Middle English works.

Middle and Modern English, my tutor argued, were not two separate languages, and therefore it was not possible to translate between them.

I'm not sure I agree with him, but the habit of avoiding the word 'translation' in this context has stuck with me.

My question to you is: if this process is not 'translating', what should we call it? 'Rewriting' suggests that more major changes are taking place (as does 're-imagining'); 'updating' suggests the original is somehow irrelevant.


On the theme of Simon Armitage, have you seen the film of Rufus Sewell reading Armitage's 9/11 commemorative poem 'Out of the Blue'? It's up on YouTube: