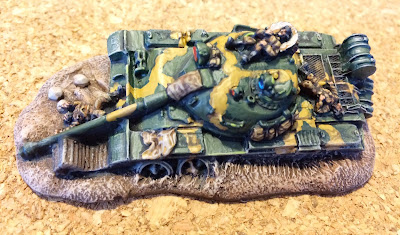 A grim fate for this T-55 and crew...vignette from Peter PigAs Curt's Analogue Hobbies Painting Challenge cracks along, I have actually managed to enter two of the consecutive Bonus Theme Rounds.  The first was "Nostalgia", and the second, due this past weekend, was "Epic Fail".  Here is my submission for that round - a vignette of a knocked out T-55, painted in a variant of camouflage used by the Syrian army in the 1973 Yom Kippur War. 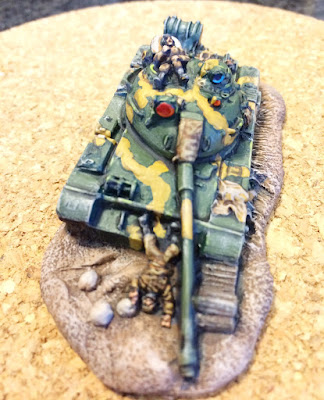 I generally avoid casualty figures, as they are kind of grim, and too much like painting terrain, which I hate doing.  But this little vignette from Peter Pig has been sitting around the pending pile for years, waiting for a coat of paint, and the Challenge was just the right spur to get it done. 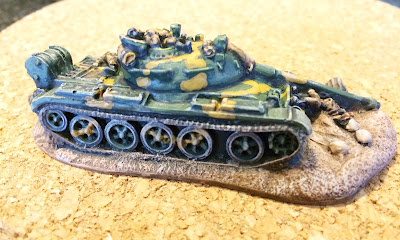 The Syrian attack on the Golan Heights in 1973 caught Israel by surprise in a strategic sense, but the tankers on the Golan that day October would have seen the attack coming from their well-sited and prepared defensive positions, and the outnumbered IDF Centurion crews extracted a fearsome toll from the Syrian attackers.  Many Syrian T-55s met the fate seen here...as such this is a perfect, if somewhat haunting, piece of terrain for 1973 games. 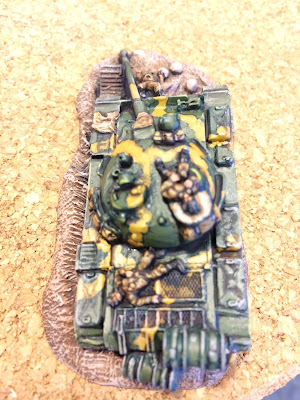 The next bonus theme is "Defensive Terrain".  I despise painting terrain of any sort, so I'm not sure I will come up with anything for that round but I still have a couple of weeks, so we'll see.

As always, I encourage you to check out the Challenge and the Bonus Theme Round page to see all sorts of creative work by the Challengers.  You should take some particular time to check out Byron's outstanding "Epic Fail" submission - off the hook, and worthy of your time, and even votes if you can spare the clicks!