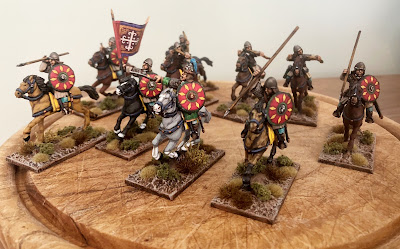 My 12th submission to Curt's Analogue Hobbies Painting Challenge saw my brushes return to a previous project...thanks to the timely arrival of some parcels in the mail,  my 28mm Byzantine project has been able to resume! Freshly resupplied with LBMS transfers and banners, as well as some steel spears, I  completed the next unit in my Byzantine collection. No surprise - more cavalry! These are lighter, skirmishing cavalry - although they can form up to fight in a pinch. The figures are 28mm metal castings from the fine folks at Gripping Beast, and the banner and shield decals are (obviously) from LBMS. 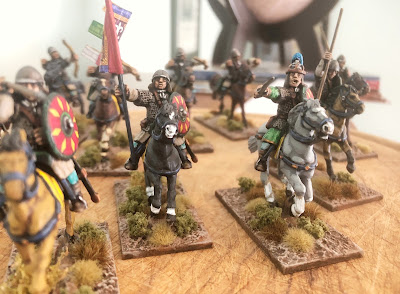 I enjoy the character of these castings - particularly the commander!

As with all of the Byzantine units there is a mix of arms/capabilities within the group. Six of the models are meant to be armed with a mix of throwing spears and or javelins, and four of them are mounted archers. They are meant to skirmish and harass larger enemy formations on the battlefield, and keep enemy skirmishers from doing the same to key elements of the Byzantine battle line. 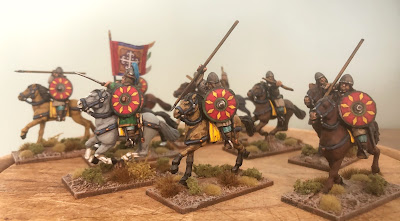 Steel spears!! I love those things!! They make a difference for figures like these.

These castings from Gripping Beast have oodles of character, and were quite a lot of fun to paint. The LBMS transfers were, as ever, a real b*tch, but still 1000% better than trying to paint shield patterns on my own. The headaches those things cause are so worth it in the end! 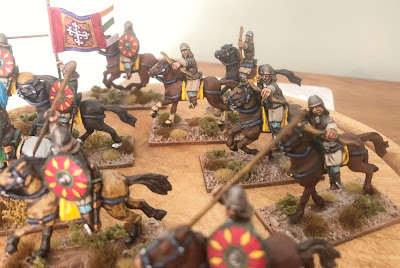 Mounted archers in the mix, helping to pepper the enemy with missile fire. 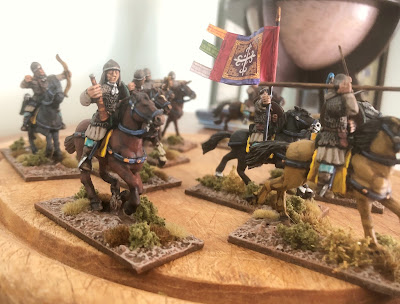 I figured a musician would be important for a light cavalry unit like this, to directing them and their maneuvers.

These models are all based individually, so in addition to representing a unit of light cavalry in a game of Warhammer Ancient Battles, this group could be split up into various elements for a game of "Lion Rampant". The mounted archers in particular are flexible - they could be dispatched to join the heavier unit of cavalry to bulk it out, depending on the scenario. 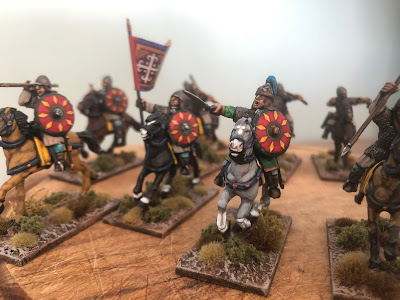 Thanks for reading - stay tuned for more everyone! Hope you are staying safe and, as always, staying sane...