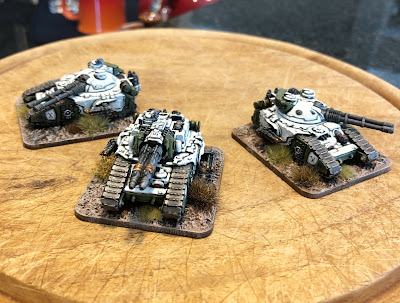 "Super-heavy" tanks in 6mm from the 14th Space Marine Legion, the Death GuardMy eighth entry to Curt's Analogue Hobbies Painting Challenge takes my brushes back to some Horus Heresy and Epic 30k material - the 6mm(ish)-sized-mass-battle version of GW's science fiction games.  There are two "Fellblade" class tanks and one "Falchion" class tank, and they are all painted in the markings of the 14th Space Marine Legion, known as (charmingly) the "Death Guard". 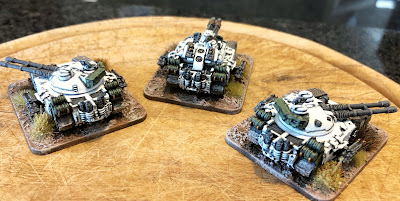 Lovely little private sculpts - in metal, with great, crisp details.The Horus Heresy setting features lots and lots of tanks. Lots! Yay! This small scale is ideal for deploying masses of tanks, so playing 30k in "Epic" is great fun! While models exist for these beasts in the regular 28mm size of the game, getting more than one or two of those massive machines on to a regular-sized table is hard.  On the other hand, in the small size of the models in the "Epic" game lets you put whole squadrons of these monsters on a regular table, and do so with comfort!

I had painted a fair amount of Epic 30k material back in a different Painting Challenge...I think edition VII? Anyway, good to have some sci-fi breaking up my otherwise very-historical-focus these days. 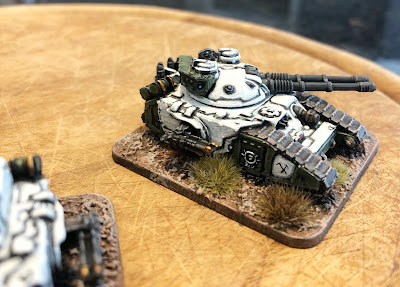 I love the silhouette of the Fellblade...just a bonkers tank. As with the 10mm FPW figures from my last submission, these are models have been painted "on the side of the table" - something I work on while other projects dry, add a layer here, colour there, and then they finish at some point.  This sort of semi-scattered painting approach may slow me down a bit overall, but I find it makes the painting more fun in general.  Particularly when the "side of the table" thing is very different in either subject or scale, it adds some variety overall. 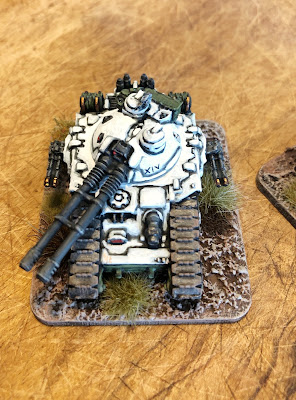 This angle shows some of the additional heavy weapons mounted in both the front hull and the side sponsons. Byron already has a great a collection of Death Guard Space Marines for Epic 30k (and in 28mm too), so these are somewhat superfluous in terms of our overall group...but I do like the Death Guard, already had a few infantry and vehicles painted myself. I already had these specific models too, with their Legion iconography was sculpted into the doors, so I thought I would paint them up as intended.  I mean - how could a game where the Death Guard deploy three super-heavy tanks be better? Why, one with six super-heavy tanks, of course! I'm hoping Byron's troops won't mind the company...

The Fellblade, with its bonkers twin-main guns, and demolisher cannon, AND heavy bolters, AND quad laser weapons (on BOTH sponsons!) is one of the most heavily-armed vehicles to be found in the 30k setting (or, at least, thing that it is still a vehicle, as opposed to Titans).  It's bananas, and they are a lot of fun in Epic 30k.  Even if you are commanding just two of them in an Epic 30k game, when it is your turn to shoot...you are doing a LOT of shooting. Fun! 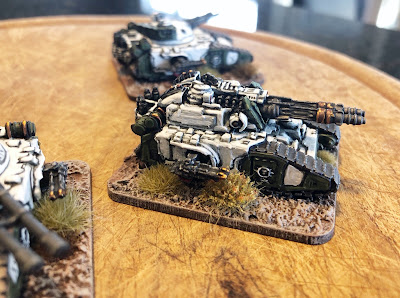 The Falchion - super-heavy-tank-destroyer extraordinaire!If the Fellbalde is meant to be a kind of "general" battle tank, the Falchion has a much more specific purpose - it is a warped 30k-vision of a super-heavy-tank-destroyer, featuring a massive energy weapon (and, you know, still with the quad laser cannons on the sponsons, one presumes to let the crew have some sport while the big weapon re-charges).  The Falchion tries to knock out enemy super-heavy tanks, and also has sufficient firepower to severely damage or even knock out Titans.  Just look at that bonkers weapon! Oh man, I love the 30k setting...the very best, crazy sci-fi designs, brilliantly done. 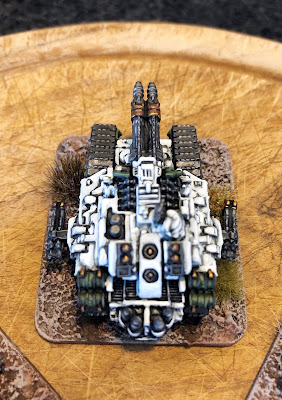 A view of the bizarre machinery powering the Falchion's main battery. These smaller models did not net me a whole lot of "points" in terms of painting, but every little point helps.  I look forward to a great big super-heavy-tank smackdown in Epic 30k sometime soon with the gang!