Now That Was Some Project... 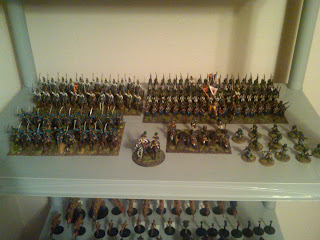 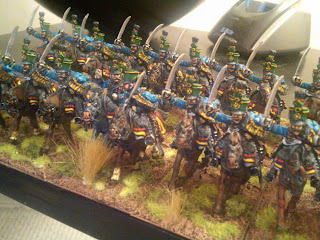 You may note the caveats "pretty much" and "basically". Well, the cavalry unit is supposed to 24 models strong, but it is currently sitting at 20 models, as I have a shortage of figures from Foundry. I ordered a final pack of Hussars back in February, and it never showed. To Foundry's credit, they have said they will re-send another package. It has yet to arrive. So I hope at some point I will be able to paint the last three figures, and do a full 24-rider unit. In the interim, I'll have these guys a little under-strength, but still ready to fight. I'm not going to let this little supply hiccup hold up the completion of the project! Plus, I am looking to rack up some more points in Curt's Spring Thaw Painting Challenge.

All in, I've painted three infantry battalions, two cavalry regiments, two artillery pieces and crews (which would either be two batteries or two sections of one battery depending on the rules), a skirmish unit and a command stand. A total of 133 28mm foot figures, 49 mounted figures and two artillery pieces. 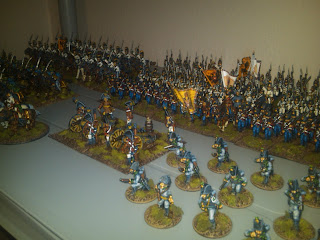 So where did this insanity come from?

Over the past couple of years, as new ranges of Napoleonic 25/28mm figures, many of them plastic, have appeared, with newer "grand manner" rule sets to match them. Examples include LaSalle, Black Powder, and Republic to Empire. These rules (to me, at least) challenged the focus on the really large major engagements (Austerlitz, Waterloo, etc.) by the gaming/rule-writing 'establishment' of Napoleonics (Shako). Shako has a lot going for it, but to me they are maximized for the very large encounters and large portions of the biggest battles.

With these newer rules, you can play a smaller engagement, with bigger-sized units. Play Waterloo if you want, but you'll have just as much fun with a smaller engagements, of which there were countless numbers throughout the period of the French Revolution/Napoleonic wars. Because you don't need 20 battalions on one side, you can paint much larger units. And you can also do it because it looks a lot cooler. You don't need to...but the implied peer pressure is clear :)

The newer rule books make you mental and jealous, full of pictures of 32-figure battalions and huge, huge collections (all beautifully painted). I was very, very skeptical of this "grand manner" notion. I loved the smaller games, but I struggled to wrap my head around painting the huge units. After all, one huge unit was worth like two Shako-sized units, right? Plus, I paint all sorts of stuff in all sorts of scales and periods. I felt trying to go with the big units would require me focus on this one period.

Inspired/baited/motivated by Conscript Curt, I took the plunge into "grand manner" sized units. One of the engagements given as a starter scenario in the ruleset LaSalle is the battle of Venzone from 1809. Curt figured the Austrian OB for this scenario would be a good basis to start with, and challanged me to get it done, pledging to have the French side ready for his part.

Curt is very skilled a turning my skepticism on its head, and so I finally got started. I am very glad I did! In the end, I found it was possible to get the painting momemtum going to a point where I could finish these units in a reasonable amount of time, and I love the look of them. Now that I have a bit of a base collection in place, adding more units doesn't seem like its such a dire challenge. I am already plotting to expand my Austrian force, and do some other nationalities too. And of course I am looking forward to getting them on the table soon...