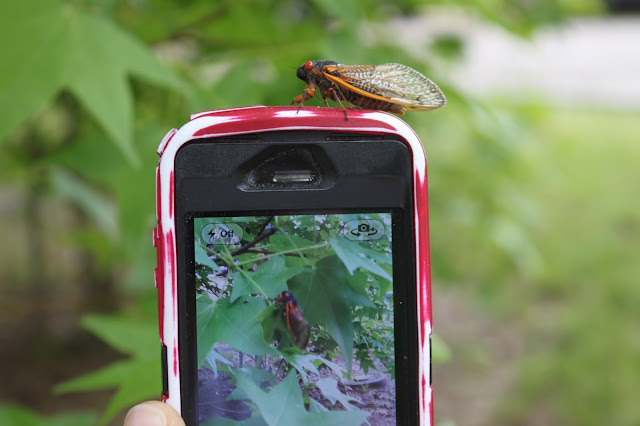 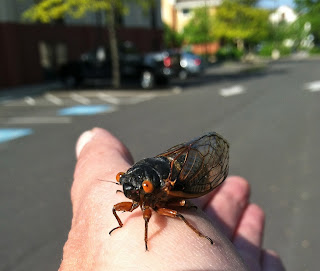 I forgot they were coming.  17 years ago, small eggs hatched along tree branches, and tiny larva dropped to the ground, burying themselves deep within the roots and earth to grow in preparation for their 2013 debut.  The scheduled emergence of Magicicada broods along the East Coast did not come to mind until mid-May, when I found this little guy sitting on the windshield of my car in the parking lot of a New Jersey hotel the day my cousin got married.  I was so excited to have seen one, an actual magicicada, or any cicada for that matter.  I didn’t consider what hundreds of them might look like, or sound like.  But I was about to find out just a few weeks later. 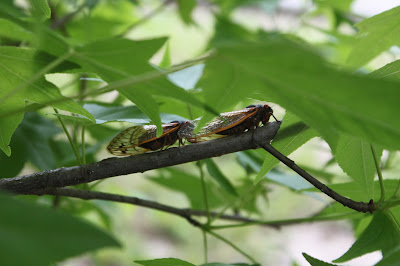 At the end of the month, while visiting family in Fredericksburg, Virginia over the Memorial Day weekend, the Spotsylvania County area was completely over run with these fascinating, and unusually friendly insects.  When I first crossed the county line, I heard them singing.  The sound was so loud and so foreign to my ears, I dismissed it as a fire alarm in the distance.  Then, one at a time, these husky insects began charging at my windshield, and I could feel them under the wheels of my tires, crunching under the pressure – poor things!  Their sounds from the wooded areas grew louder as I approached the tree-lined development, and by the time I pulled in and parked along my parents shady driveway, my car was practically covered.  One even dropped onto my shoulder. 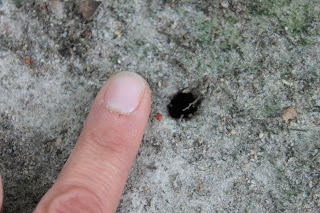 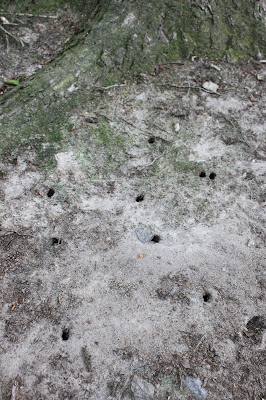 Holes from the Magicicada emergence.

I returned to Philadelphia with maps of the last brood’s sightings, and expected emergence areas.   I waited.  I looked.  I listened.  I visited Fairmont Park and walked the Wissahickon trails, but I never saw (or heard) anything close to the giant brood that hatched in Spotsylvania County.

All the Etymologists say that if you haven’t seen a magicicada by July, then you’ll most likely have to wait for another 17 years.  As I write to you now, I have still only heard faint calls of Magicicadas through the trees in the denser wooded areas of Philly, but the real show this year remains for me the Virginia brood.  So, for my friends in Philadelphia who may not have had the opportunity to see the Magicicadas in all their glory, I am posting video and digital images of those that I encountered.  In the video below, you can hear them in full force!


ABOUT CICADASCicadas are fascinating creatures.  Everything about their life cycle and habits is unusual and intriguing. 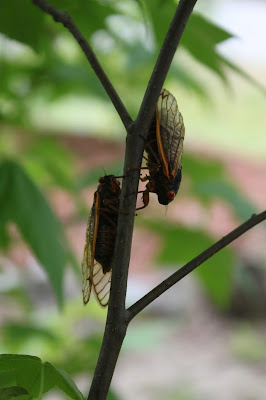 I could write a dozen blogs filled with fun facts about cicadas.  For this piece, I’ll try to stick with the science, but I encourage you to check out the websites below to learn more.
There are six species of periodical cicadas, three with a 17-year cycle and three with a 13-year cycle. The three species in each life-cycle group are distinctive in size, color, and song. The 17-year cicadas are generally northern, and the 13-year cicadas southern with considerable overlap in their distribution. It is possible for both types to occur in the same forest.
For the purpose of tracking and scientific study, each brood is designated by a Roman numeral.  I through XVII are assigned to the 17-year broods.  XVIII and higher are assigned to the 13-year broods.  You may wonder what happens when the 17 year old broods reach the roman numeral XVII, being their end number.  The brood the following year starts again at Roman numeral I.  The numbering of the 17-year broods began in 1893, when the brood that year was designated as Brood I. In 1909, Brood XVII appeared, and in 1910, Brood I appeared again. 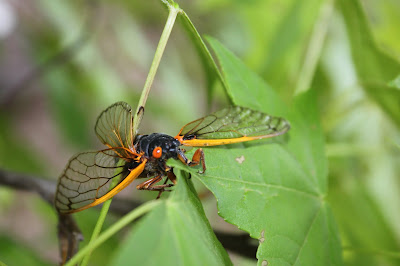 Interesting to our state!  In Pennsylvania there are Cicada broods being tracked during eight different years in different areas across the state.  All of the Pennsylvania broods require 17 years to reach maturity. Several of these broods are very small. There is very large brood known as the  "great eastern brood”.  I will begin to look out for them!  Maybe I will have more luck here in Philly in a few more years.

Where To Learn More: 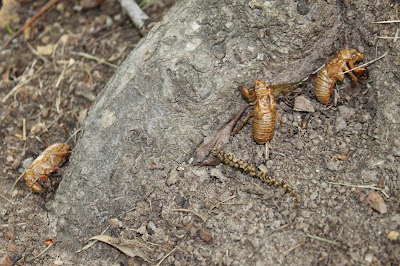 Magicicada - Remnants of Molting Phase
Magicicada WebsiteFor a vast array of information about Cicadas – Including other species of Cicada and additional info on Magicicada brood.  Cool mapping projects here!
http://www.magicicada.org

Penn State Entomology Periodical Cicada Fact Sheet  Including a Timetable of expected appearances of the periodical cicada in Pennsylvaniahttp://ento.psu.edu/extension/factsheets/periodical-cicada