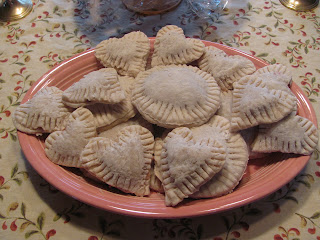 
I shared this photo on my Facebook Page and had several folks request the recipe.  Problem is, like with many things, I don't really have a recipe.  I should have taken photos while I was preparing the hand pies, but I didn't.  So, I will try to explain how I made them and hope that those wanting to replicate can make sense of it!

First of all, I used my recipe for pie crust made with leaf lard.  The leaf lard is seriously the secret ingredient that makes the crust so delicious and these little pies so scrumptious!  We raise our own hogs, fatten them up on Jersey milk and render our own lard.

After making and rolling out the pie crust, I used a large cookie cutter to make the hearts and an extra large drinking glass to cut out the round pies.

I had some cherry pie filling that I had made from cherries Mike picked several years ago and I used that to make my hand pies.  Basically, the way I make my fruit pie filling is to cook the fruit with sugar until it is soft and then add a bit of cornstarch mixed with water to thicken it up.  (You can also use flour and water to thicken it up if you are opposed to using cornstarch.  The cornstarch is less likely than flour  to leave lumps in the filling, in my opinion.)  Another good choice would be this apple pie filling that I have canned or make a peach version of the hand pie!

In the center of the bottom crust of each little pie, put a small amount of your pie filling.  Then, cover the pie with the top crust.  Take a fork dipped in flour (and continue to dip it in flour as you go) to crimp the edges of your hand pies.  Then, place your little pies on a clear, glass, ungreased, Pyrex dish.  (I used a 9 x 13.)  Place your pies in the oven that has been preheated to 350 - 375 degrees and let them cook.

Watch them carefully as you don't want them to burn and it doesn't take long to cook the little pies.  (I estimate maybe 10 minutes?)

Allow the pies to cool on a wire rack is best, but you can improvise by allowing them to cool on a paper towel or kitchen cloth.  You just don't want them to sweat on the bottom when they are cooling.

My intention was to freeze some of these little pies for snacks later but it doesn't look like I am going to have any left to freeze!

Enjoy and let me know if you have any questions!