Livng With Little Bull Is Challenging! 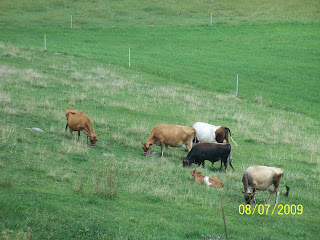 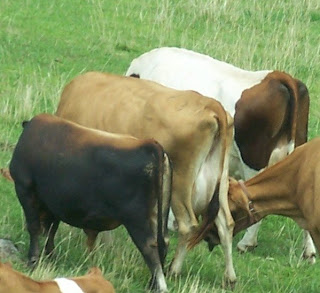 Little Bull has a bad attitude. He blows and paws the ground. He rubs his head in the dirt and mud. He rams the posts and buildings. I can't go into the field with him and this makes milking a challenge. I have to get the cows in to a little holding area and Little Bull wants to come along. When I lock him out of the holding pen, he gets mad. In addition to just being a young bull that is dealing with raging hormones, we think he might be acting this way in part because he is fed grain at his house and we do not feed him grain. I have always heard that feeding grain to a bull makes them mean but I never really stopped to think about it as we never fed our bulls grain. Little Bull has been raised a lot different than how we raise our bulls. Comparing him with the bulls that we have raised according to the methods Temple Grandin encourages in her article, I will definitely continue to advocate her methods. Once a bull, always a bull, and a bull should never be trusted. However, some sure can be easier to work with than others!

The pictures above show little bull with some of the herd, as well as a picture of Little bull with my two tallest standard cows. We know he's got a big attitude. When these two big girls come in heat, we will see if his attitude is enough to enable him to get the job done. It's definitely not going to be easy for him to reach them.

In the mean time, I guess we will just have to live with the challenge of Little Bull or I will have to resort to AI (Artificial Insemination).

I really hope little bull can get the job done in "short" order!