I finished my second unit of Imperial Fists. Progress has been slow with this project, though not for a lack of painting. The Mark III armour is very challenging in general and the yellow makes it worse. I am quite happy with the results however. Dallas asked if I was going to weather them up. I initially balked at this as it took so long to paint the yellow. I changed my mind after considering the state of the loyalist legions during the Horus Heresy. Considered from the Imperial Fist point of view, they are in seriously deep s#!t. 3 Legions nearly destroyed, 3 legions apparently building a new Imperium in Ultramar (terrible book by the way) and the Space Wolves and White Scars off doing God knows what. The Imperial Fists are pretty much it and I can see them being tasked to help put out every little flare up in Segmentium Solar, in addition to trying to re-enforce Terra for the inevitable apocalyptic invasion by Horus. Sending their armour off to the cleaners is probably on hold for now. So after some research on Youtube I came up with a weathering strategy that I think worked well. I used weathering powders for the lower legs and feet. Yellow armour is very unforgiving with weathering powder. Too little isn't visible on the model, but too much and it looks like they're wearing thigh high leathers. I think I found the right balance. 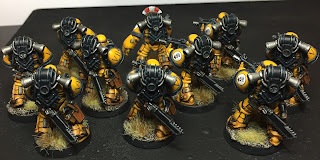 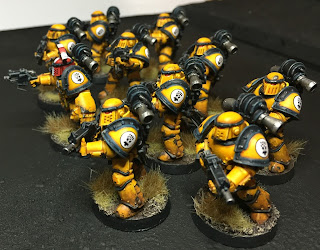 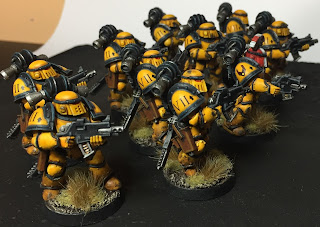 This was originally supposed to be a small army, but a never ending stream of packages from Canada Post have made it anything but. Still not equal to the traitor forces accumulated by Greg, but with Dallas' Blood Angels and some Shattered Legions' we should be able to have a Battle of Terra game in the new year (probably not the new year.) Next up is a 20 man Tactical Squad.