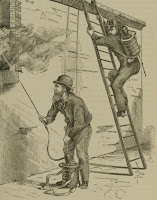 Mrs A and I enjoy a relaxed lifestyle in our seaside retreat, but there's no shortage of blues-and-twos action in the local weekly to keep our pulses racing. These examples were culled from the two latest issues:

Firefighters were called to a chimney fire in Porchfield last Friday morning. The fire was out by the time they arrived at the scene.
A bonfire in a driveway on Monday evening resulted in an emergency call to firefighters. One pump was called after receiving a report the bonfire was close to parked cars.
Firefighters used a bucket of water to extinguish a small rubbish fire in a bath during the small hours of Saturday morning.
The IW Fire and Rescue Service was called out to rescue a ten-year-old boy stuck up a tree in Ryde on Saturday evening. Firefighters used an extension ladder to rescue the boy, who was stuck 16ft from the ground. They had previously freed a teenage girl from a child's swing at the play area in Park Road, Cowes.
A box containing paper on fire in Regent Street, Shanklin, was put out by firefighters on Tuesday. It happened at around 2.15am.
A fire in a skip at Somerton Industrial Park on Thursday was extinguished within 20 minutes of being reported at 8.20am.
A small gorse fire was put out near Ventnor Golf Club at around 9pm on Sunday. The incident, which involved around a three metre-square* area, was over by 9.30pm.