Game Tonight - Battle Of The Bulge 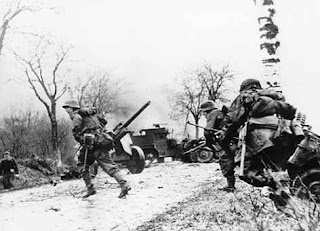 Tonight we will be playing Spearhead. The scenario will be set in the Western Front, the Ardennes in late 1944 and the Battle of the Bulge.

I concede readily that I have not delved too deeply into the specifics of the Bulge. I purchased "Hitler's Last Gamble" over a year ago in the hopes of finding gaming inspiration. Instead, it was one of those rare military history books with almost NO MAPS, so was damn hard to follow and I never did finish it. But I think we will capture the flavour of the Bulge with tonight's game, even if the unit specifics are not exactly right.

Another point of disclosure - I have precious few parts of my 6mm collection actually painted for winter - but screw that. We'll be able to make the table look somewhat wintry, and at any rate I don't know that the US troops had much of their stuff painted white. I know the Germans probably had a lot more...but hey, it's 6mm for fr*k sakes, and I do at least have some "winter" Panthers.

Anyway, the specific scenario will feature a desperate US defence of the approaches to the town of St. Vith. US "Combat Commands", scraped together from available local resources are in place to block the German advance. The Germans, who had envisioned capturing St. Vith on the second day of the offensive, are behind schedule. They still have the advantage, but will have to deal with challenging terrain, roads and unforgiving victory conditions that will call for them to get past the Americans as soon as they can.

In looking through my collection, it occurred to me that tonight will be something of a watershed when it comes to Spearhead - it will be the first time we use Americans. In fact, while I have a significant chunk of American models, I don't think we have ever rolled with Americans on the board for either Spearhead or Modern Spearhead. So a first for tonight's game! Look forward to seeing everyone and watching the tanks get stuck in the snow and mud.