Taking advantage of a few things today - the push to get a few final models done for the big New Year's Day game (Siege of Terra part 2), plus a day off from work and a chance to do some photography and blogging. Gilles (seen above) is helping too - so let's get at it! First up is a Rapier Laser Destroyer and crew. The crewmen's armour sports the markings of my IV Legion artillery troops - a single chevron on the right pauldron. 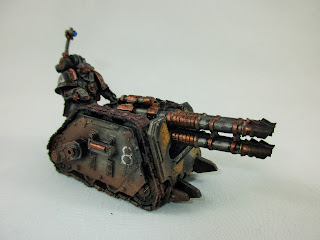 The Rapier carriage was done in the same style as the rest of the Legion's vehicles (and indeed the infantry models too) - Leadbelcher and Brass Scorpion basecoat with an allover Nuln Oil wash, followed by Reikland Fleshshade on the gold. The chevrons are Averland Sunset heavily weathered with chipping (black and Rhinox). Earth tones on the model are drybrushed Mournfang Brown and
Steel Legion Drab. Tracks are finished with a diluted rust powder wash. 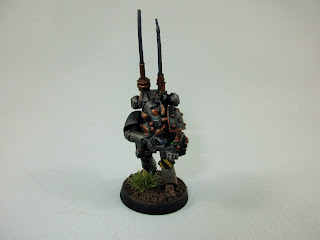 The Master of Signal will stand in as a techmarine for the force. The communications gadgets on his armour are pretty cool. 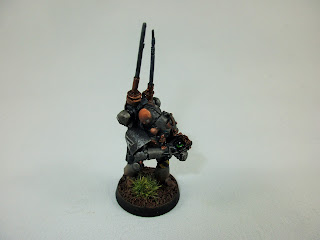 Narik Dreygur also got done in this batch. A pretty cool character model. 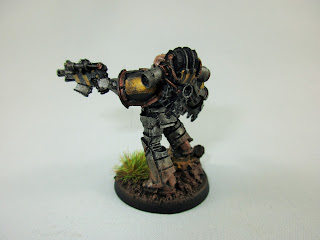 Of course, one always wonders why these guys don't wear their helmets. What do the think they are, 1970s pro hockey players??? The main bunch of models I wanted to get done, though, were the Breacher siege troops. How cool are these guys? MKIII power armour and giant shields! I was torn between leaving the shields black-faced with a "IV" Legion decal, or doing the hazard-striping. Industriousness won out over laziness, for once. 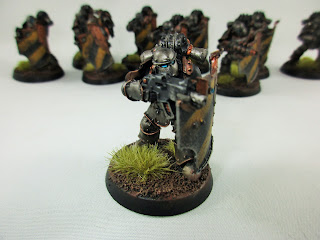 The poses are great, with the Marines really leaning into their shooting. The models were pretty easy to assemble, too - the bolters rest nicely on the shields giving another purchase for adhesive. 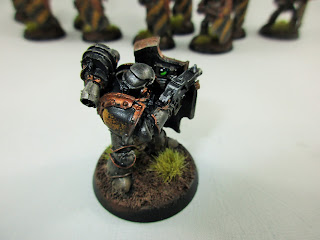 Painting the viewscreen was a little tough given the close quarters. It would've made more sense to paint the shields before assembly, I guess. 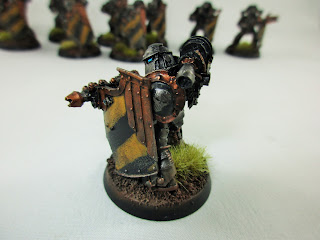 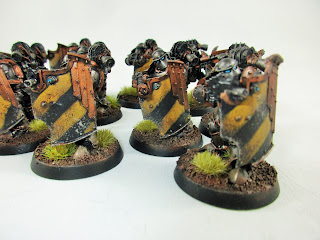 A few closeups from the group shot. Really looking forward to fielding these chaps tomorrow in the Siege game. Mike's bringing his giant Terran Wall terrain (no word on who paid for it, though :-) and I think the Breachers will be right at home... "breaching" it!

And as that's likely it for my blogging activity this year... Happy New Year to everyone!