Did you wait for it? Or did you go on and make the Chocolate Chess Pie yesterday using your own pie crust recipe or even, Heaven forbid, you used a purchased pie crust?

Well, I told you I would give you the recipe for the flaky pie crust I used with my pie (Friend Janice is still talking about the crust - how flaky it was.) If you remember I got this cookbook (The Pie and Pastries Cookbook - Favorite Recipes of Home Economics Teachers) at Hillcrest Thrift Shop. They were selling it for one dollar and they just happened to have their books on 50% off that day. So do the math - I only paid 50 cents for possibly the best pie cookbook I have - and I do have several.

The recipe just called for an unbaked 9-inch pie shell. I found a really good one from the Amish that I made and shared with you, but I think I am more like my mother than I realized. I think I may have mentioned before how I have containers of recipes my mother had collected. Lots of them are cut-outs from newspapers and magazines. And lots of them are ones she wrote a little pieces of paper. I think she used whatever happened to be close by when she saw a short recipe she wanted to try. She had two favorite recipes she wrote down many times - ones for pie crust and ones for dumplings.

I have to be honest and say I don't really remember Mother making a pie with an outstanding crust. I'm sure she did, but my memory is not what it used to be. I do remember that she made the best dumplings in the world. The funny thing about her dumplings - I don't think she had a standard, "go-to" recipe for them. Whenever they visited us, I would always tell her she had to make dumplings before they left and every time she would look through my cookbooks for a recipe for them.

When it came to pie crusts, she often would write down a recipe entitled "never-fail". I remember one that is on a piece of an envelop that she had torn off and it was almost not big enough to write the few ingredients down. (There is one in this cookbook on the same page called, Never-Fail Pie Crusts. I wonder if it is the same. It might be similar but this one makes like four crusts. Mother didn't make that many pies at a time.)

Sara Palmer of Ft. Wayne, Indiana contributed this recipe that makes 2 pie crusts. I simply cut it in half because I only needed one pie crust. On the previous page in the cookbook, there is a chart for Proportions for Basic Rolled Pie Pastry (I will share the chart later in the post.). Sara's recipe was basically the same as the recipe in the chart for 1-crust 8 or 9-inch except for a couple of "secret" ingredients. I have to think those two ingredients transformed the basic rolled pie pastry into the flaky pastry.  I decided I would basically use Sara's recipe with a little influence from the one in the chart. (I will explain in the recipe.) I am also writing it for one pie crust. If you want to make two crusts, just double the ingredients. 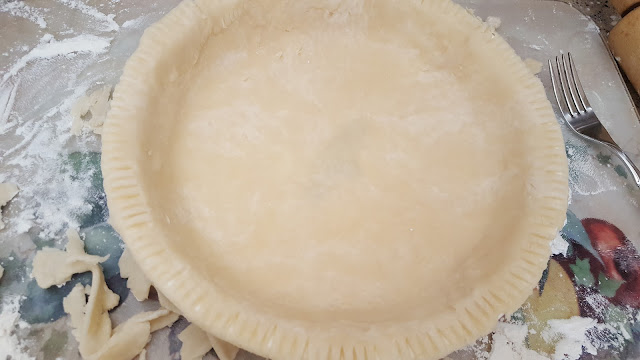 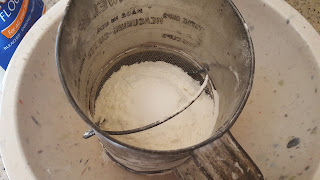 Sift the flour and salt into a bowl. 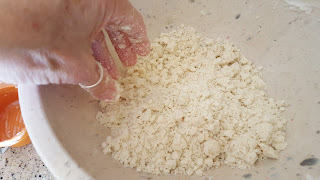 Cut in shortening and butter until crumbly. I always use my fingers to do this instead of a pastry cutter. 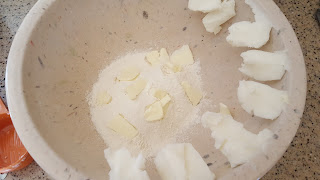 I measure out the shortening in a measuring cup, but took it out in small (maybe 1/2 tablespoon or less - I don't really measure) portions and scraped them to the side of the bowl. I took the tablespoon of butter and sliced it in think pieces so it would work in better. 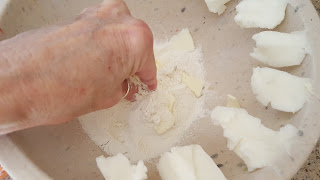 I worked the butter in first and then slowly added a portion of the shortening at a time until I had all of it "cut in". I just make sure there are no lumps left. 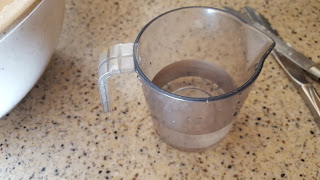 Then mix the water and vinegar in a cup and measure out 2 tablespoons and add to flour/shortening mixture. (I did this because I wanted to have plenty just in case 2 tablespoons were not enough - Sara apparently used all of the mixture in her doubled recipe but the basic recipe only called for 2 tablespoons water added and worked in 1 tablespoon at a time. I think I would just do 4 tablespoons at first in the doubled recipe and add more only if the dough doesn't come together in a ball. You certainly don't want the dough to be wet and have to add more flour.) 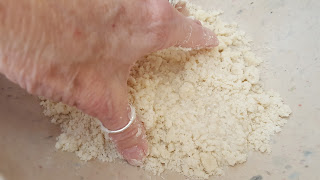 Work the mixture with my fingers and 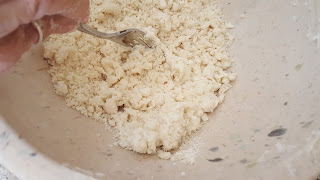 with a fork until 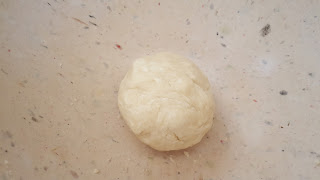 it comes together and makes a ball. 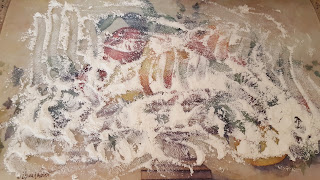 With a lightly floured surface (I love to use my tempered glass cutting board for this purpose. I also sifted the flour I used on the surface.), 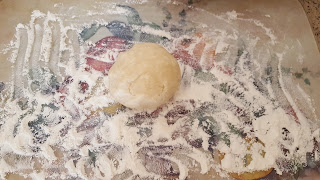 lightly press the ball with your fingers 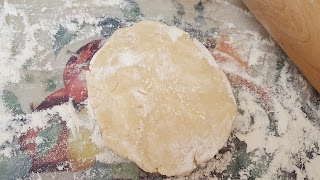 into a flatter circle. (I turned the "circle" over several times as I flattened it and moved new flour into the area of the board to make sure the surface was floured.) As I flattened the ball, I also worked the edges as they broke back together smoothly, so it would roll out more rounded. (It doesn't always work out great, but I think this helps. You can also repair any broken or shortened edges with the excess you might come up with.) 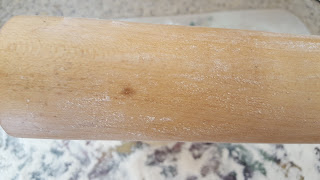 Once I had the circle maybe 6 inches, I rolled it with a lightly floured rolling pin. 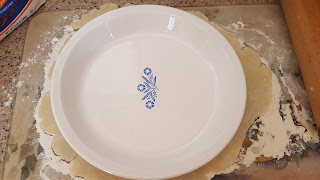 When you have the crust rolled out bigger than the pie plate you are using, start rolling the crust onto the rolling pin from one edge till you have about half of it on the pin to lift and 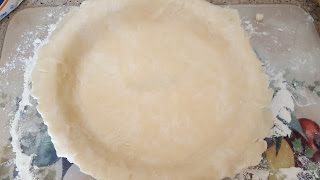 place over the pie plate. (Sorry I don't have a picture of this.) 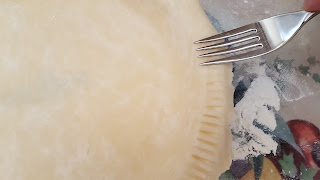 When I don't have enough extra crust to flute the edges, I just use my fork and imprint the edge of the crust with the fork tines. (My mother would do this.) 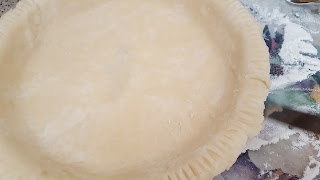 Then just cut off any excess and make sure you repair any places that might need it.


Your crust is ready for the pie filling.

Here is the "chart" I promised above. I also added the information if you want to use these ingredients but make the crust "flaky" below it. If you are making a 9 - inch crust and want to have a high fluted edge on the rim, I would recommend that you make the 10-1/2 - inch crust so that you will have enough dough to fold under the edge.

* Double ingredients if you want to make 2 crusts.