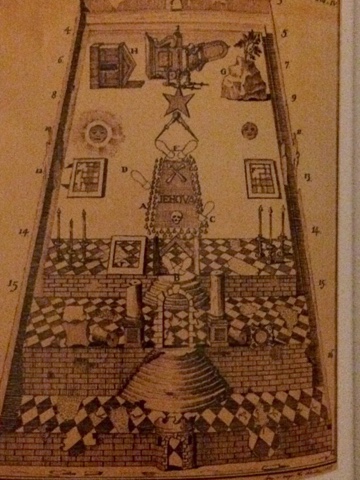 All Masonic rituals make use of the architectural symbolism of the tools the medieval stone masons used to use. They use this symbolism to teach moral and ethical lessons, for example those concerning the four cardinal virtues Fortitude, Prudence, Temperance, and Justice. Solomon's temple (see image above) is an important symbol in Freemasonry, holding the first three Grand Masters King Solomon, King Hiram I of Tyre, and Hiram Abiff, the craftsman who built the temple.

My husband gave me a very interesting book on mysticism, and it had lots of illustrations that connect to Freemasonry, so I thought I'd share a few tidbits from it. (Yep, I know this isn't exactly etymology, but symbols are a kind of language, aren't they?) 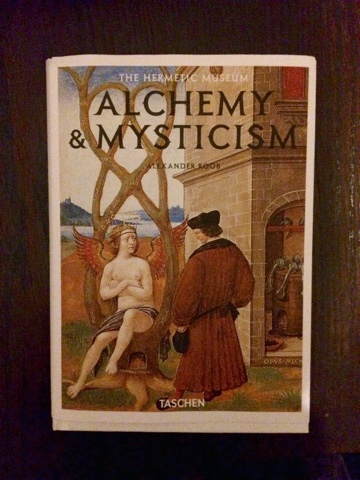 Here's the book. It's full of gorgeous illustrations and fascinating facts on alchemy and symbolism. I highly recommend it. 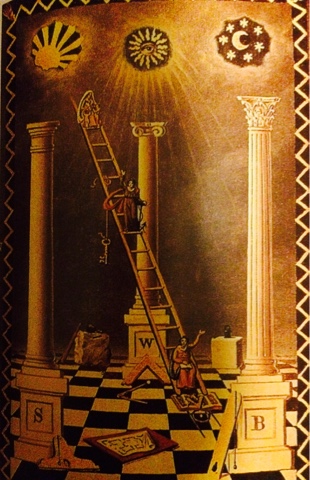 This depicts the ascent into freemasonry based on three ""great lights": the Bible, the compass, and the square. The glyph (circle with dot inside, near the foot of the ladder) defines the Freemason's task as it places him (the point in the center) in relation to the infinite horizon. The two vertical lines symbolise John the Baptist and John the Evangelist standing by him. The Freemasons have a three-tier rank system adopted from the guilds (apprentice-journeyman-master), and the Jacob's ladder represents the process that transforms raw stone (the apprentice, Prima Materia) into the cubic stone (lapis, Master, I'm assuming?).The female figures are Faith, Hope, and Charity, and the columns represent Strength, Wisdom, and Beauty. One of the columns is Doric, one is Ionic, and one is Corinthian, but I'm not sure if that has any significance. "Beauty" is the most ornate one (Corinthian). The masonic eye is a symbol of the eye of God, and the sun and the moon are also a part of that. On the left you can see the level, which reminds the Masons that they are living on the level of time. The key symbolises silence and urges the Masons to keep the secrets of Freemasonry. I'm probably missing some stuff, but you get the idea. 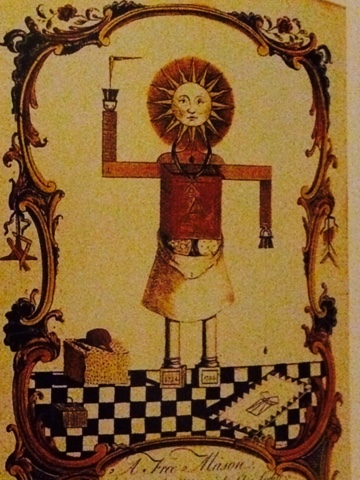 This is an image depicting a Freemason, formed from the materials of his lodge. The sun represents the imperishable spirit. You can see some of the symbols mentioned above in this image, too. The ear of corn represents the slow and organic course of spiritual maturity, and I think he's wearing the leather apron that's a symbol of Freemasonry. The tassels are a part of the "uniform" too. The chisel tells the Freemasons to smooth out rough parts of their character. The masonic square and compass are also included, of course.  The drop thingy hanging from the figure's left hand might represent the level, but I'm not sure about that one.

If you want to know more, check out the links below.