In September, Ken and I traveled to Prince Edward Island.  In many restaurants and on billboards, we kept seeing the word "Donair."  So I asked the lady at the front desk of our hotel what it was.  She explained that it is a local to Nova Scotia dish that is very popular there.  It is meat prepared a very special and unusual way, with onion, tomato in a pita with a sweet donair sauce drizzled over the top.  Being who I am, I had to order it and try it.  It was delicious!  But I just couldn't figure out the meat.  What is that?  When I got home, I googled recipes and found that the meat is ground meat, usually beef, spiced and compressed, baked, chilled and cut into thin slices, then fried or otherwise reheated.  Ah!  No wonder it was so tender and delicious. It tastes like little tender pieces of steak. Donair is really not hard to make and it is really good. 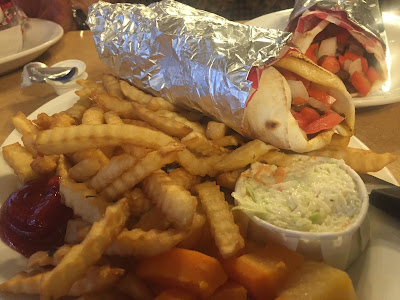 Our first taste of donair on Prince Edward Island 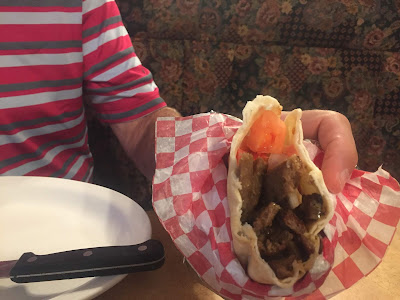 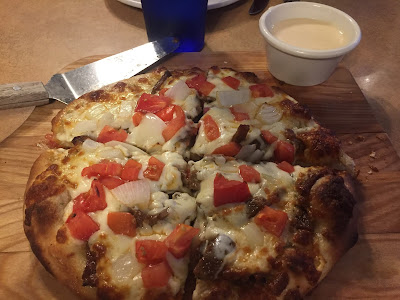 We later went back to that same restaurant and I ordered the donair pizza.  Man, was that good!!! 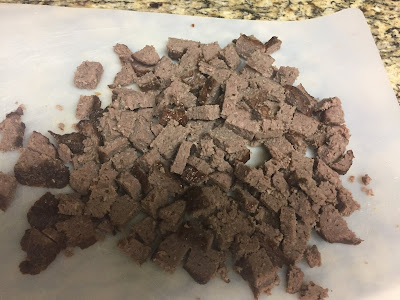 The meat has been spiced, compressed, baked, chilled, and sliced into thin squares. 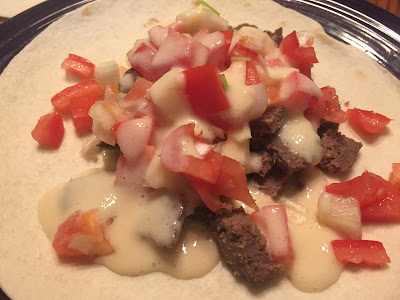 Donair
Preheat the oven to 350

Put 1 lb. ground beef in a steel mixing bowl.  With your hands, mix in the spice mixture.  Pick the meat up and throw it down with force about 20 times, kneading it after each throw.  This will help the meat hold together when you slice it and really compress it.
Form the meat into a loaf, and place on a broiler pan.  Bake for 1 hour 15 minutes in the oven, turning the loaf over about half way through.  This will ensure even cooking.  Allow the meat to chill before slicing and reheating.  .  When chilled, slice the meat into small, thin squares.  Heat a skillet and fry the little meat pieces in oil until browned.
To make the donair sauce mix together:
1 can evaporated milk
3/4 cup sugar
2 teaspoons garlic powder
Gradually whisk in:
4 teaspoons white vinegar, one teaspoon at a time, until thickened to your desired consistency.

Put the meat on wraps or pita bread.  Top with plenty of  chopped onion and chopped tomatoes.  Drizzle with the sauce.

This is how they make it, but we found the raw onion to be a bit overpowering.  So the next time I tried it, I fried the onion with the meat squares.  We liked that much better.  Next I want to try the pizza.