During my yearly sojourn in Winnipeg, I had the chance to share some wargaming time and a few beer with the Winnipeg Conscripts at Casa Violago.

I had prepared a scenario featuring some of my sailships: On the morning of 14 February 1797, a British squadron of 15 ships of the line met a Spanish fleet twice as numerous, with 27 ships of the Line, including the giant Santissima Trinidad. The HMS Victory was present, as well as Nelson, but on a different ship, and he was only Commodore at that time but was ready to break the rules of traditional sea warfare. The scenario was played with fewer ships: the British had 9 ships and the Spanish, 14.

The rules I used are a modified version of "Trafalgar" that I called "Trafalgar Redux". The original rules are great, but things start to slow down drastically when more than 5 ships per side are used. In "Trafalgar Redux", many elements of the rules are heavily simplified to allow battle with more ships. For example, the saving throw is replaced by additional boxes on the ship. Firepower is integrated into the ship display sheet. Modifiers for firing are limited to 3 and ships can fire at any point of their movement without penalty. If ships are in column, then they all move as one unit, etc. 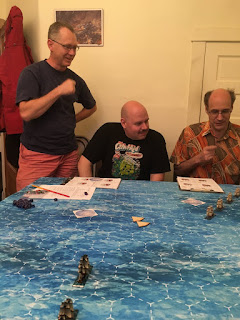 From left to right:  Sylvain, shaking dice for the sake of shaking dice, Byron and Brian, proud Admirals of the Spanish fleet. The orderly British column, at the bottom, starts its steady progresion towards the Spanish mass of ships, partly visible in the upper right corner of the table. 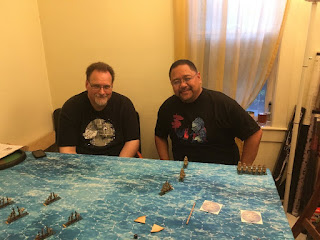 Kevin and Dave, the British Admirals, smiling confidently as they listen to all the special rules favouring the British side: Spanish roll for morale for each critical hit they receive, British reroll "1"s when firing, etc. etc. etc. 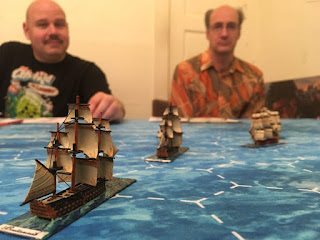 The HMS Britannia, a first rate, 100 gun ship, follows the HMS Victory towards the thick of the Spanish fleet.  The Spanish Admirals are ready to give the order to fire. 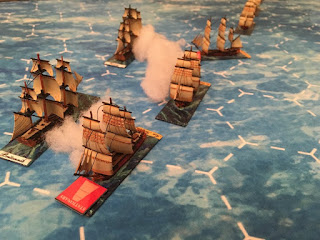 First smoke! Furious exchanges of cannonballs resulted in one Spanish ship already striking colours, as indicated by the red marker. Spanish ships can be identified by their yellow stickers at the back of the base while British ships feature white stickers. 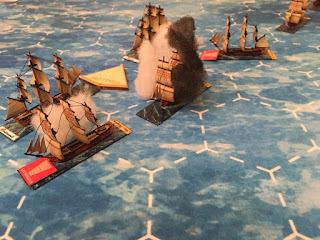 A Spanish ship on fire. But this is nothing compared to the HMS Britannia that will later be lit like a torch. Fire from the hull of HMS Britannia will eventually spread to all the masts and the crew had to work frantically for many turns to get everything back under control. Many good sailors were roasted during the event. 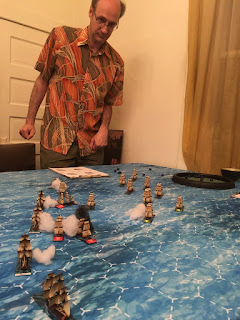 Brian assessing the situation from a standing position. The British are rigorously maintaining their line as directed. 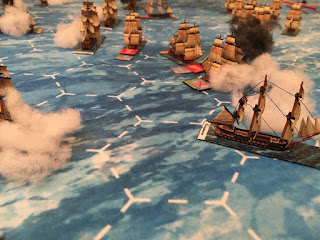 Nelson, who was only Commodore at that time, was the only one allowed to break the British line in order to accomplish something awesome. Here HMS Conqueror (playing proxy to HMS Captain) blocks the line of incoming Spanish ships. 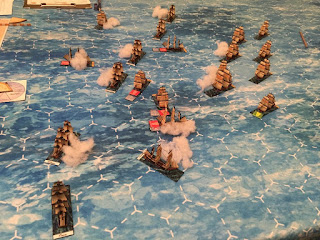 Exchanges of fire are getting more numerous as the the fleets are penetrating each other. I just love how the smoke puffs translate the intensity of  the battle at this point. It is also possible to visualize who is shooting who. 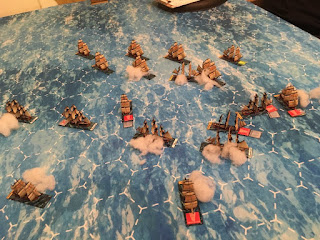 The last turn played. Five Spanish ships had striken colours at this point, meaning a marginal victory for the British. From the point of view of the umpire, the whole battle was very fun to watch, and I think that if the modified rules did not work perfectly, they worked satisfactorily.

In retrospect, I think that the Spanish fleet should have put the big heavy hitters at the front, and give the officers a more central position in the fleet, to help with the morale checks. With the special rules, the Spanish had to keep their ships very close to each others in order to recuperate from striking colours. 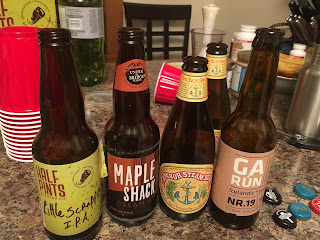 No real sailors or miniature ships were hurt during the game, but the same can't be said about the above bottles, only remain of some delicious beer brought by the participants.

Thanks to the Winnipeg Conscripts, Brian, Byron, Dave and Kevin, who were kind enough to push my little ships around the board for a whole evening!