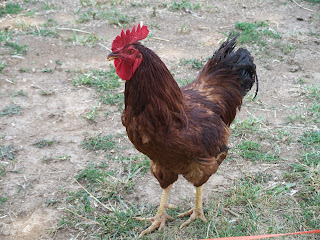 Our animals play games. They play games with their own kind, but they even reach outside their comfort zone and play games with species other than their own. For instance, the rooster pictured above loves to play games with our Corgi, Sadie. The goal of the game is to be the one to finish off the dog food that is in the bowl. It goes like this on most days:

Rooster wakes up at the crack of dawn and begins crowing. Even though Sadie has an elaborate dog house, she usually sleeps right by the gate of her dog yard where she can keep close watch on her domain. I go out early morning and let Sadie out of her pen, and then I proceed to the chicken house to let the hens and rooster outside for the day. Rooster is one of three and the other two roosters don't really like him around. Rooster always leaves the chicken yard quickly and begins to scope out Sadie's house. If Sadie is not around her house, he will nonchalantly make his way to the designated spot, stopping to eat a bug or two along the way or scratch through a cow pie. These antics I am sure are designed to throw off the unsuspecting observor. Once he makes it to Sadie's house, he hops up on her porch (yes, Sadie has a porch) and begins to eat her food. At this point, I can't help myself, and the fun begins. I say, "Sadie, Rooster is eating you breakfast!" Sadie runs growling and barking and Rooster begins running and flapping his wings! They will go around the dog yard several times before Rooster makes his way through the gate and out into the field where she continues to chase him for a while just for good measure.

However, the game does not end there. On occasion I put Sadie in her pen and shut the gate. Rooster is smart and knows that Sadie can no longer reach him. So, Rooster will make his way nonchalantly to Sadie's place once again. This time, he begins to walk slowly around the perimeter of her fence, strutting and flapping and looking proud as only a rooster can do! Sadie remains by her gate and just watches him. Sometimes he will tease and torment her for hours. She does not bark at him, but watches him closely. When I release Sadie from her pen, she comes running out with all four feet practically off the ground, barking and growling and Rooster heads for the lower field!

There is not a day that goes by that Rooster and Sadie don't play games together.