A Common Subbing Pitfall As Shown By The BBC 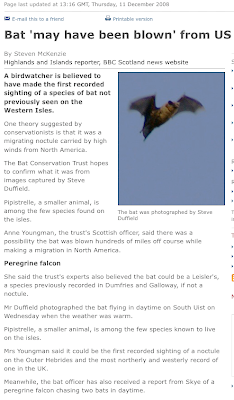 You may have to take my word for it (unless you click on the screengrab to see a larger version), but the fourth and eighth pars of the BBC News story shown over on the right are identical.

Both pars read: "Pipistrelle, a smaller animal, is among the few species found on the isles."

I'm blogging about this not to mock the BBC but to highlight a common pitfall for busy subs – only completing the first step of a two-step operation.

I have no way of proving it, but I imagine this is what happened in this particular case:

While working on the story, a sub decided to move the 'Pipistrelle...' par. He* completed the first stage of the operation, copying the par and pasting it in a new location. But he was then distracted and failed to complete the second stage, namely deleting the par from its original position.

Anything could have distracted him: an urgent phone call, a crisis meeting, a breaking story, a box of mince pies in the far corner of the office. I speak from experience...

Oh, and here's the link to the BBC News page so you can check whether the story has been fixed yet:

Bat 'may have been blown' from US

UPDATE 13/12: The BBC story has indeed been changed - now it's the third and eighth pars that are identical.